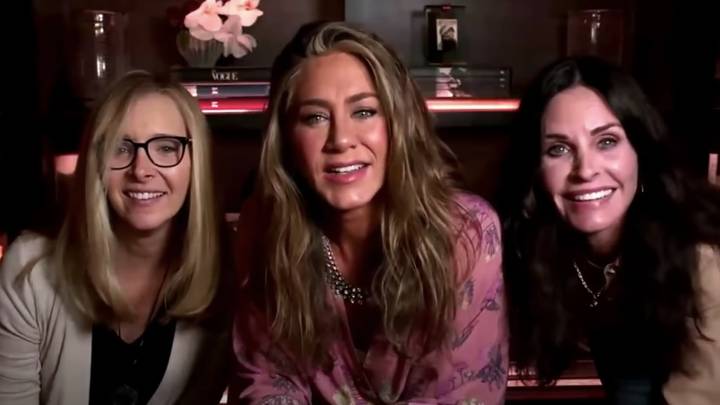 Who would have thought that the annual Emmy Awards would showcase a glimpse of what the actual Friends reunion would look like, after Jennifer Aniston had a hangout session at her home with best pals Courteney Cox and Lisa Kudrow.

The glitz and glamour of Emmys this year took a turn and was a humble affair this year, as it was hosted virtually for the first time. Jennifer Aniston had a real task in hand by hosting the opening ceremony on Sunday with Jimmy Kimmel but rushed back before her category was announced.

Jen was nominated for Lead Actress in a Drama Series for her role in The Morning Show. Even though she may have lost to fellow star Zendaya, she won our hearts when she reunited with her Friends co-stars and gave us nothing but pure nostalgia.

Jen appeared on a video link stunned everyone when Lisa Kudrow and Courteney Cox were seen joining her in the video. The girls were seen giggling away when she said she has been roommates with Courteney since 1994. Lisa was also seen walking into shot, looking oblivious she was live on TV.

Jimmy was on live video with Jen when Courteney gate-crashed their conversation saying “Of course I’m here. We live together,” when Jimmy questioned her presence.

“Yeah we’ve been roommates since 1994,” Jen teased, as Lisa walked into shot, gazed into the camera and joked: “Hey, is this live TV?”

Not long after that Jason Bateman popped up behind the girls with Jimmy joking “‘I didn’t know Ross was there too?” Jen then teased Jason saying he will be staying there till he goes off to college.

Let’s hope this mini reunion is a hint for an actual Friends reunion soon! Nonetheless, lets hope to see the gal pals on screen often, while we recollect the every fresh memory of Friends.

ShareTweetSend
No Result
View All Result