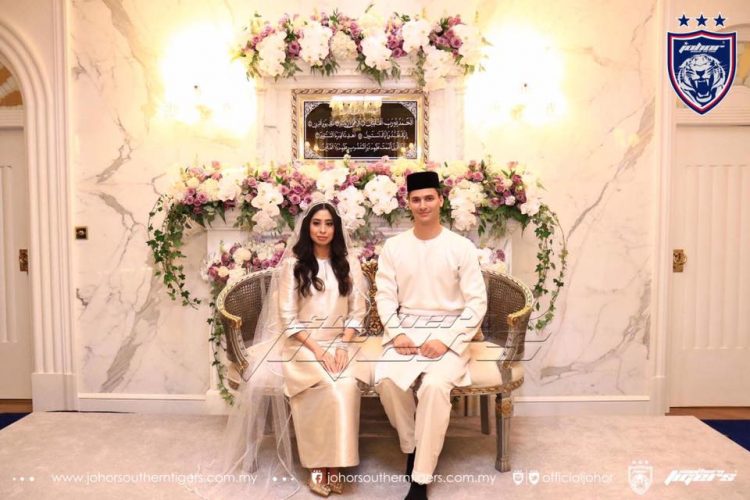 Just take a look at the cute pair, it’s obvious that they’re made for each other. 💕 In a privately held celebration, Tunku Aminah’s betrothal began with an engagement ceremony, which is then followed by the solemnisation ceremony from 10am at Bukit Serene Palace, Johor Bahru.

Both ceremonies are steeped in Johor royal tradition and customs, with the bride donning a traditional ‘Baju Kurung Teluk Belanga’ and the groom wearing the ‘Baju Melayu Teluk Belanga’. Introduced in late 19th century during the reign of the late Sultan Sir Abu Bakar, the outfit has no collar and the neckline is stitched in a style known as ‘tulang belut’ (eel’s spine). Meanwhile, the Johor Princess has revealed that she is getting her new home ready for a new chapter in her life as a married woman. It will be a new experience for her – to live with her husband-to-be, Dutch-born Dennis Muhammad Abdullah after their wedding today.

“We will move into our own home and start life anew as husband and wife,” she told the Royal Press Office. “This will be the first time I will be living alone, and away from my parents and family,” she added. Congratulations to the happy couple, we wish you all the best and may you be blessed with a wonderful marriage ahead! 💋

A post shared by Saidatulnisa Aminuddin (@saidatulnisaaminuddin) on Aug 13, 2017 at 7:12pm PDT

A post shared by Saidatulnisa Aminuddin (@saidatulnisaaminuddin) on Aug 13, 2017 at 7:19pm PDT

Moreover, a Khatm Quran ceremony was held to gain blessing for the royal wedding, at Bukit Serene Palace yesterday (13 August).