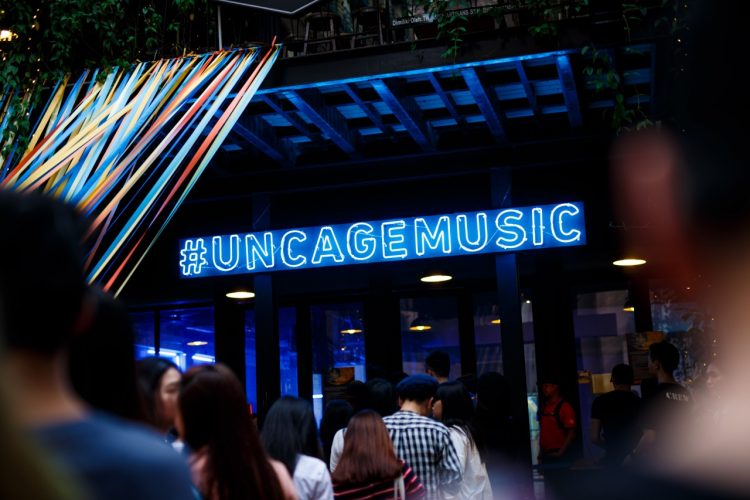 Entry to #Uncagemusic Block Party was imited to fans who scored themselves exclusive passes via various contests run by Tiger Beer and Urbanscapes, while some really lucky fans managed to score free passes on the event day itself when they purchased a bucket of Tiger Beer.

In all honesty, #UncageMusic Block Party was everything we hoped for and more. When Crystal Castles dominated the stage, we truly felt like we were in a scene of Skins UK (the best TV series ever) that follows the lives of a rebellious group of teenagers in Bristol, which also birthed the original #SkinsParty.

#UncageMusic featured something equally as amazing at Timbre where the public were welcomed to experience an immersive audiovisual collaboration between renowned local musical acts such as An Honest Mistake, Rozella and RyötJones with the iconic visual artists Kenji Chai and Cloakwork. It was indeed a feast to the eyes and ears. Few doors down the road, The Deck came to life with entertainment by Hanafuda Project, DJ Reeve and DJ Biggie. Fans danced the night away at the rooftop with the stunning view of the city on the background while treating themselves to ice-cold Tiger Beer and scrumptious food sold at the venue.

If all that was not enough, the whole back alley of The Row was filled with art pieces for public to admire, pop up food and beverage carts and a beer garden throughout the day. If you didn’t manage to attend this event, fret not! Tiger Beer is brewing something even more epic for you, so keep a lookout for the announcement on Tiger Beer’s Facebook page.