Sens-Asians! 8 Netflix Shows With Asian Leads You HAVE To Watch! 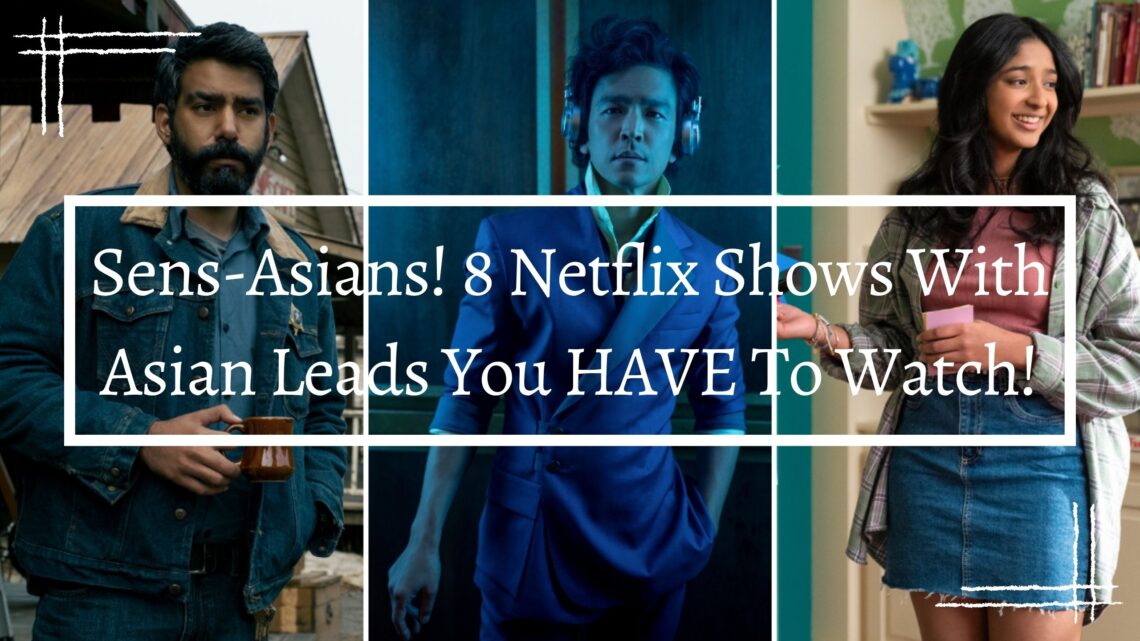 Gone are the days when Asian actors are relegated to the role of sidekicks or forced to play cringey caricatures of simplistic stereotypes. Well… almost gone. It’s still pretty obvious how modern TV shows try to slip in a flash of diversity by using the “Asian/Queer best friend trope.” *cough cough He’s All That cough* But on a positive note, Netflix has seen a rise in the number of Asian lead roles and we are here to see it!

With audiences demanding and welcoming more diversity in Hollywood in recent years, we’ve been racking up some wins on-screen with nuanced portrayals of Asian characters, as well as relatable representations of our culture in Western media. Check out these films and television shows that feature Asian actors at the forefront of the plot:

John Cho, who was born in Seoul and moved to Los Angeles with his parents as a child, has set a number of milestones for Asian representation in Hollywood since becoming the face of a movement, including the first Asian American actor in history to headline a mainstream thriller film with 2018’s Searching.

Cho plays Spike Spiegel in the upcoming Cowboy Bebop live action series, an impossibly cool bounty hunter with even cooler hair who travels the solar system with his ex-cop partner, Jet Black (Mustafa Shakir), in search of the universe’s most dangerous bounties.

2. Jessie Mei Li and Amita Suman in Shadow and Bone 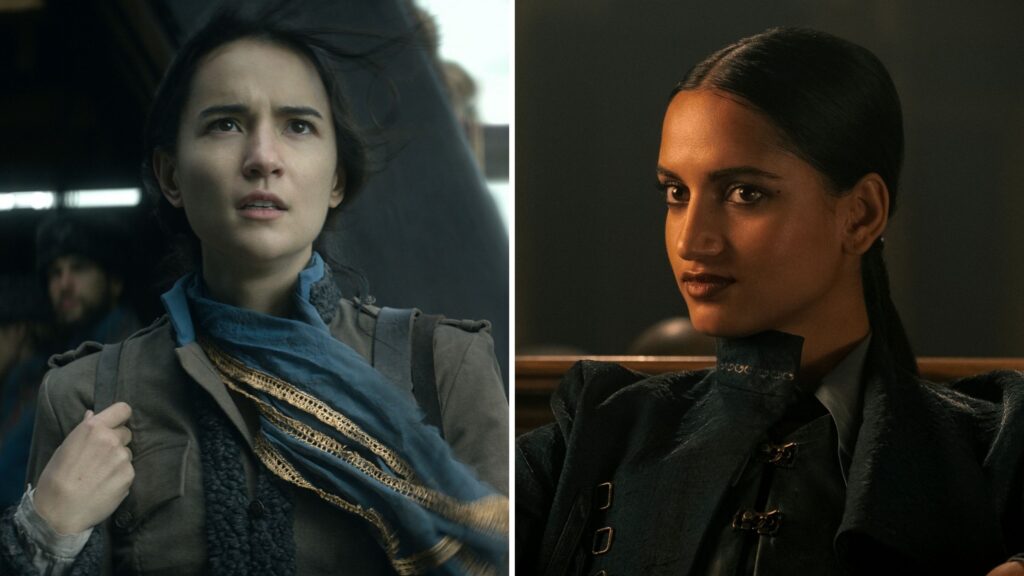 Much like her half-Shu, half-Ravkan character Alina Starkov, Jessie Mei Li is of mixed-race heritage. Having grown up in the UK, Li ​​— who was born to an English mother and a Chinese father — was able to tap into her personal experiences to bring Alina to life.

“For lots of people [who are] mixed-race or first-generation immigrants, you spend so much of your life not feeling like you belong anywhere,” she expressed in an interview with Comics Beat. “That is essentially Alina’s problem when we meet her. She doesn’t know where she belongs. She doesn’t know how important she is. It really shapes who she is, [in] the same way it does for me.”

Li also identifies as gender-nonconforming and uses the pronouns “she” and “they”.

Similarly, Li’s co-star, Amita Suman, who plays indentured servant-turned-knife wielding spy Inej Ghafa, drew inspiration for the role from her own real-life experiences, having spent her childhood in a Nepalese village before moving to England when she was seven.

Speaking to gal-dem, she said, “I have the experience of what it’s like to move countries and move into a completely new world, and adapt and learn the language and figure out how life works in this new situation that you’re in. That was the experience that I could bring to Inej from a very real point of view.”

In what is probably the most refreshing and empowering portrayal of a Muslim character in Western media, Rahul Kohli — who is of Punjabi Hindu descent — plays Sheriff Hassan, a single father and a Muslim sheriff on a small, isolated island who struggles to fit in with the town’s predominantly Christian inhabitants.

Kohli, who revealed that he’s an atheist, credits his best friend Mohamed Bouissa and Mohamed Hajem for their work and input in making the character as accurate and authentic as possible while nailing the nuances of what it’s like to be a Muslim man in the present day.

In response to a fan’s question about the research and study that went into bringing Sheriff Hassan to life, he explained, “I spent countless hours discussing and learning about Islam and its beauty from my best friend, Mohamed Bouissa (who also became a consultant on the show) and during production, we worked with another wonderful consultant, Mohamad Hajem on performing salat.”

Fun fact: Kohli claims to have relatives residing in Malaysia, Indonesia and Thailand!

I’ve been before! All my family on my mother’s side are based in Thailand (my grandfather and mother were born there), Malaysia, and Indonesia 💕 https://t.co/dN5eIrweKE

It’s never too early for cheesy, feel-good Christmas movies, and there’s even more reason to celebrate the festive season with a rom-com featuring not one, but TWO romantic interests of Asian descent!

Josh’s family members are also played by Asian actors; Japanese-American actor James Saito plays his father, Bob, while his older brother, Owen, is played by Harry Shum Jr., who is of Chinese descent.

5. The cast of Never Have I Ever

The aforementioned Darren Barnet *swoon* plays a teenage heartthrob and love interest of the show’s main character, Devi, who is portrayed by Tamil-Canadian actress Maitreyi Ramakrishnan in her first ever acting credit. Fun fact – she actually has relatives in Malaysia!

Often lauded for its diverse casting on top of its nuanced representation of Indian culture and values, Never Have I Ever also stars Poorna Jagannathan and Sendhil Ramamurthy, who play Devi’s parents, as well as Richa Moorjani (Devi’s cousin Kamala), Ramona Young (Eleanor, one of Devi’s best friends), Megan Suri (a new Indian student in Season 2), and Utkarsh Ambudkar (the English teacher Devi is friends with).

6. Lana Condor and Ross Butler in the To All the Boys trilogy

Lana Condor, who plays Lara Jean, was born in Vietnam and adopted as a baby by American parents.

In an interview with Teen Vogue, the actress revealed that she “felt so comfortable and very understood” playing a mixed-race character, having grown up in a mixed household with an adoptive brother who is Asian and white parents. Some parts of the movie even mirrored Condor’s IRL experiences; just as Lara Jean’s father tried to have his daughters connect with their late mother’s Korean heritage in the movies, the actress revealed that her parents also wanted her to learn more about her culture, such as trying to get her to eat Vietnamese food.

The film trilogy also stars Singapore-born actor Ross Butler, whose mother is actually Chinese-Malaysian! Also, some of his favourite foods are roti canai and a chicken curry his Penang-born mother taught him to make, so… #doneclaim.

7. Ali Wong and Randall Park in Always Be My Maybe

Fans of Ali Wong are probably aware that the actress and comedian was born to a Chinese-American father and Vietnamese mother, thanks to her delightful anecdotes about them in her Baby Cobra comedy special, while Randall Park’s parents moved from Korea to Los Angeles, where he was eventually born and raised. In fact, Always Be My Maybe — which he co-wrote with Wong — was inspired by some of his IRL experiences growing up in LA.

Keanu Reeves, who makes a brief but significant appearance, is also part Chinese on his paternal side.

8. Sandra Oh in The Chair

Born to South Korean immigrants who moved to Canada in the 1960s, the incomparable Sandra Oh has come a long way since she turned down a journalism scholarship to study drama and pursue an acting career in her youth.

In The Chair, the award-winning actress adds another — albeit fictional — ​first to her list of accomplishments as Ji-yoon Kim, the first woman of colour to be appointed chair of the English department of a major university.

Catch all of these shows with Asian leads and more, only on Netflix!