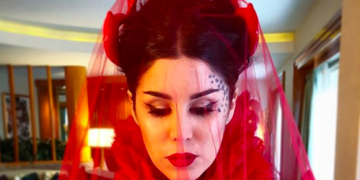 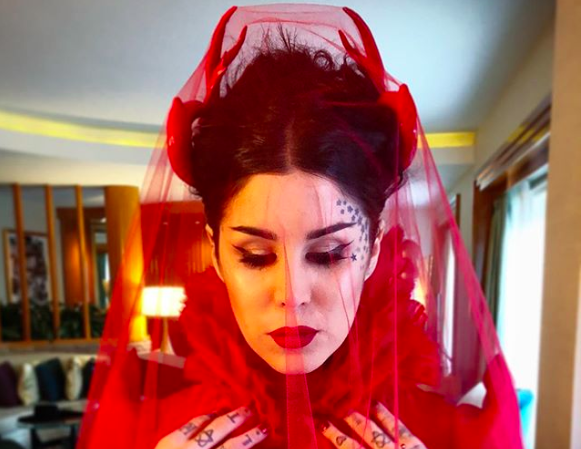 A wedding like no other, Kat Von D sure knows how to have a great one without compromising her own personal style that we all love and admire.

The tattoo artist who is also a super successful makeup mogul, has married Prayers singer Rafael Reyes — also known as Leafar Seyer (his legal name backwards) — back in February, but it seems like the couple wasn’t satisfied with a small ceremony and decided to have a bigger, bloody one this time around.

Still feeling the emotional electricity from our wedding last night with @prayers. We are spending today together reliving our vows, our beloved friends love, and all the artful beauty we created together, and I promise to share our epic wedding photos with you all soon as well as a bit more of our feelings about everything – as right now, we are both so overwhelmed with all the Love. Con todo la magia y amor en este mundo…

On Saturday, they celebrated their nuptials by throwing an extravagant reception with friends and family, and the bride looked like what can only be described as a devil goddess, wearing a bright red, ruffly, pregnancy-friendly gown with a custom-made veil and cape, all by designer Adolfo Sanchez.

(She had dropped an illustrated hint on Instagram about how the dress might look, but the drawing truly doesn’t do it justice.) It was topped off with matching red, branch-like horns seemingly growing from her voluminous updo, which was flawlessly styled by Adir Abergel.

Although we haven’t yet gotten the details of exactly what products were used for Kat Von D’s makeup, it’s safe to say it was probably all from her own line. It did not, however, seem to include the black-and-gold lipstick made as a keepsake exclusively for her wedding guests.

In an post shared on Prayer’s Instagram page, Rafael wrote, “In a couple hours I’ll be walking down the aisle with the love of my life @thekatvond ❤ EN VIDA Y EN MUERTE 💀” (FYI, en vida y en muerte is a spanish prayer which means life and death). Awwww! Aren’t they the sweetest?