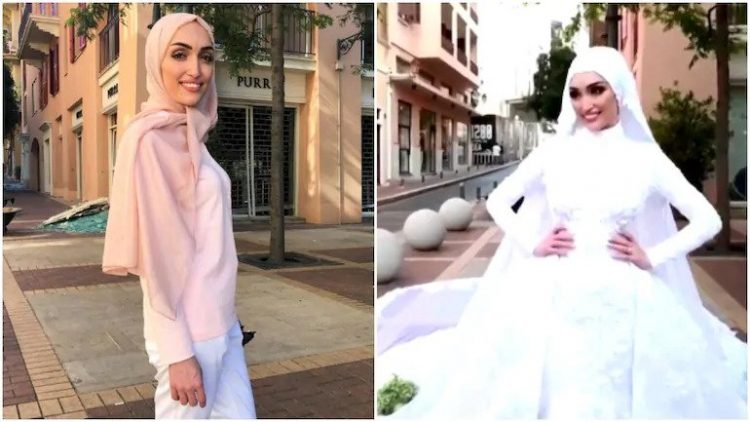 Many shocking news and terror visuals related to the recent devastating Beirut blast have been circling the social media which has left the world in much despair. A video in particular has given many viewers goosebumps due to the distressing visuals. In the video, 29-year-old Lebanese bride Israa Seblani’s is seen dressed in a long white gown and veil in the midst of her on-going bridal photoshoot when the powerful blast took place and almost blew her off her feet. The video captured the deafening roar of the blast which was followed by a powerful shockwave.

A bride was posing for photos when the massive explosion happened in Beirut. 🙏🇱🇧 All thoughts & prayers are with the people of Lebanon. [via @mahmoudnakibb]

The event, which was supposed to all about happiness, turned panicky and chaotic in the video captured by the person recording her wedding shoot. Seblani, a doctor working in the United States, had arrived in Beirut three weeks earlier to prepare for her special day. However, after the explosion, she fled to safety after helping to check on the injured nearby at central Beirut’s Saifi square.

A day after the horrific explosion, Seblani and her husband Ahmad Subeih, 34, a businessman in Beirut, struggled to comprehend what had happened. “I have been preparing for my big day for two weeks and I was so happy like all the other girls, ‘I am getting married’. My parents are going to be happy seeing me in a white dress, I will be looking like a princess,” quoted by India Today.

Subeih recalled the horrific aftermath of the blast, “We started to walk around and it was extremely sad, it was not describable the devastation and the sound of the explosion,” he said. “We are still in shock…I have never heard anything similar to the sound of this explosion.”

After the blast, she and her husband got hold on themselves so that they could carry on with the celebrations. She said, “My husband told me to continue, we can’t stop. I was like okay, why not, we continue. I was not living the moment actually, I was like walking, my face was smiling, my lips were smiling, that’s it, not more. Then we went to have dinner.”

We are glad that the bride and groom are safe and managed to celebrate their wedding amidst the life-threatening blast that killed hundreds and wounded thousands. We continue to pray for the safety of the people in Beirut.