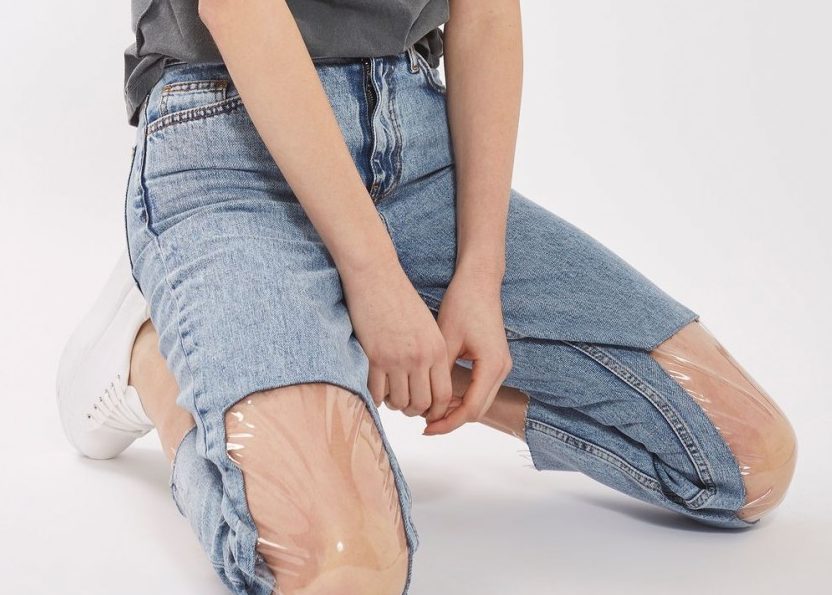 Sometime long ago, someone ingenious decided that jeans with holes developed at the knee doesn’t belong in the trash, and the rest is history. In fact, there’s nothing not to love about rebel style beaten-up denim that’s distressed and ripped as it looks badass and lends a rugged vigor to any ensemble.

And while jeans, whether ripped or not, are a classic staple, the people behind Topshop are trying to stir some sh*t up with its new Moto Clear Patent Mom Jeans, putting the internet to a divide. Why? The mom style jeans feature two giant cutouts covered with clear plastic panels halfway across from the thigh all the way down below the knee.

he wept, for there were no more worlds to conquer.https://t.co/OICWceRKCO

The high-street brand’s description for the product on Nordstrom reads that the plastic panels are supposed to be “[baring] your knees for a futuristic feel”, but aside from the handful of positive reviews, the rest of the people are confused and skeptical, to no one’s surprise..

Mad libs, but for fashion. https://t.co/DpMPYZge39

a friend just sent me the worst jeans i’ve ever seen pic.twitter.com/bIY4ewdiYD

These are actual jeans you can buy at @Nordstrom that cost $95.

We are truly living in the dark time line. pic.twitter.com/vv9flwQeXx

There’s also an ongoing thread on Tumblr about the jeans in question..

They are questionable, but just in case you are interested, the Topshop jeans retail for US$95. As of now, we are unsure whether or not they will be made available in Malaysia.

Sexual harassment cases have been rampant these past few years and while some are vigorously trying to find ways to...