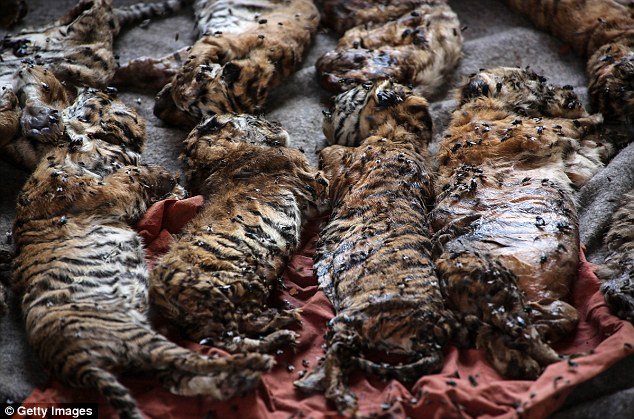 Even if you haven’t been there yourself, we’re pretty sure you’ve come across photos of your friends or people of the Internet posing with tigers at this place dubbed the Tiger Temple in Thailand.

For decades, the Wat Pha Luang Ta Bua temple in the western Kanchanaburi province has been a popular tourist destination and for a steep fee, visitors also get to pet and be photographed with the predators.

Days ago, the said Tiger Temple was forced to seize operations after Thai authorities raided the place after removing 137 tigers from the complex, and what they found is beyond horrifying..

Animal rights groups say that the tigers are heavily sedated when they pose with tourists, and the accusations that the Tiger Temple is involved in the illegal wildlife trade, breeding tigers, and selling dead and live animals on the black market proved to be true.

Thai authorities caught a monk trying to leave the Tiger Temple, and in his car were was tiger skins and amulets. Amongst other grim finds include tiger body parts, full-body tiger skins, fangs, and dozens of smaller pieces of tiger fur.

Authorities also found the carcasses of forty tiger cubs that were stuffed into freezers. A small bear, a dead boar, jars of animal intestines and a set of horns were recovered as well.

In two days, 40 tigers were tranquillised and removed. They have been relocated to government animal shelters around Thailand.

The monks are suspected of mistreating the animals and having been involved with illegal breeding and trafficking of the predators. They turned back previous attempts to take the tigers away and continued to resist. They then relented after police obtained a court order to carry out the raid.