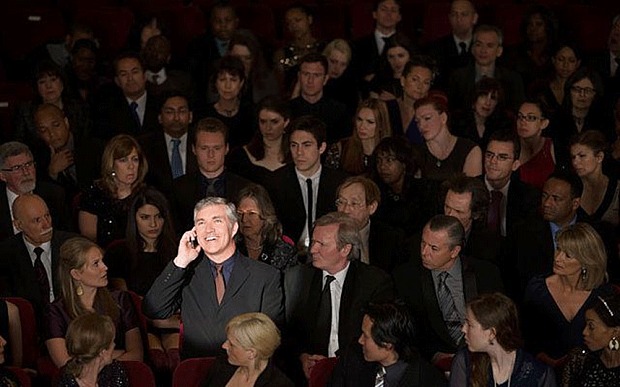 Imagine this: you’re a performer, let’s say broadway. It’s opening night so this is a big deal for everyone. Not just you. The production crew had put all their blood & sweat to make this work.

It’s time, you go on stage and do your thing when suddenly you see a tiny red light that wouldn’t stop blinking in the sea of audience and just like that… you’re distracted and soon forgot your lines because of an inconsiderate audience member that wouldn’t put their phone down.

Because of a similar situation, a theatre in London is planning to shine beams on offenders until they stop, a method often used in China. Staff at the Jermyn Street Theatre said that it is becoming more and more frustrating when people stare at their devices during shows.

“A montage of mobile phones ringing at the beginning of the show is not effective. I think we should use lasers. Let’s give it a go. Having somebody sit next to you with their phone on, even vaguely in your eyesight, makes you irrationally angry. Maybe it’s not legally wrong, but it makes you want to kill them anyway” saidn the theatre’s artistic director Anthony Biggs.

While a collective of actors called Cumberphone Campaign thinks that the idea is okay but said there was more that can be done to combat the issue.

Lasers a bit like Whack-a-Mole!
Prevention better than Cure.
Welcome anything that highlights issue – but theatre's can do more pre-show 🎭📵

We just think that everyone should have common courtesy and let’s not steal the spotlight from the actual show! There is no excuse to be rude, guys.