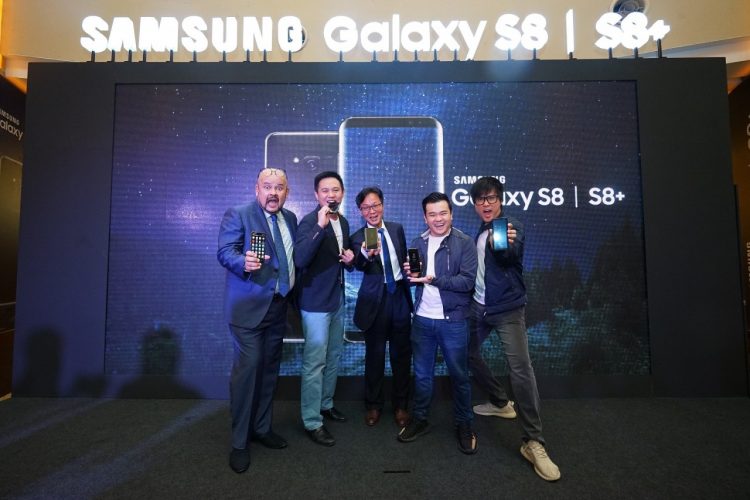 The smartphone manufacturer has officially launched the Galaxy S8 and S8+ today, demonstrating the true representations of Samsung’s technology prowess, once again defying technological barriers and turning the impossible into the new normal.

By reshaping the device with the addition of an exciting suite of new features, the Galaxy S8 and S8+ open a gateway to a rich mobile life that takes you beyond the boundaries of today’s experiences and unlock the full potential of your imagination.

The Samsung Galaxy S8 and Galaxy S8+ are perhaps some of the most high profile smartphones launched in a while. For Asia,  specifications include an Exynos 8895 octa-core SoC, Mali-G71 MP20 GPU, and 4GB of RAM. The US version has the same amount of memory, but it gets Qualcomm’s MSM8998 Snapdragon 835 processor and an Adreno 540 GPU.

The reveal promised support for the new Gear VR with Controller (RM499), syncing with your appliances (if they’re from Samsung), and even Bixby, its bespoke digital assistant. If you’re planning to make use of all the horsepower that comes with the Galaxy S8 and the Galaxy S8+, then you’re probably going to spend more time playing games than anything else.

It also connects to the new Gear 360 (RM999), placing the keys to creating immersive 360 degree content in users’ hands. The Gear 360 allows users to record 360-degree videos in 4K that place viewers at the heart of the action, capturing a complete picture of the recorded experience. Samsung DeX, which retails for RM459, is a new platform that lets users use their Galaxy S8 & S8+ devices as they would on a desktop, by providing a seamless, secure mobile-to-PC transition. With Samsung DeX, users can conveniently access apps, browse the web, send messages and more directly from their phone on a larger display without having to carry multiple devices or transfer data.

The Galaxy S8 and S8+ retail at RM3,299 and RM3,699 respectively, and are available for purchase beginning 5th May 2017 at all Samsung Experience Stores and authorised dealers. For more information, you may visit Samsung Malaysia.