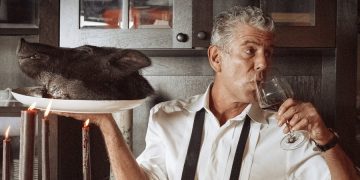 Celebrity chef, food writer and TV host Anthony Bourdain of CNN’s Parts Unknown has been found dead by suicide in his Paris hotel room on Friday. While in France, he was working on the latest episodes of the CNN series. He was 61 and was discovered unresponsive by his friend and chef Eric Ripert at Le Chambard, a five-star hotel.

“Anthony was a dear friend,” Ripert said in a statement. “He was an exceptional human being, so inspiring and generous. One of the great storytellers of our time who connected with so many. I wish him peace. My love and prayers are with his family, friends and loved ones.”

That’s a wrap. #Firenze #Panzano. An eventful week. On the battlefield and off. Making art . Every motherfucking day. @asiaargento

Bourdain’s girlfriend of two years, actress Asia Argento, released a statement on Twitter saying she was “beyond devastated.” “Anthony gave all of himself in everything that he did,” Argento said. “His brilliant, fearless spirit touched and inspired so many, and his generosity knew no bounds. He was my love, my rock, my protector. I am beyond devastated.”

Bourdain rose to fame after he released his sensational culinary tell-all book Kitchen Confidential: Adventures in the Culinary Underbelly. He went on to achieve more success through his Parts Unknown series, which is now airing its 11th season. Bourdain was filming for the 12th season before his death.

A source who worked closely with Bourdain, who travelled 250 days out of a year for work, says, “His travel schedule was gruelling and he often seemed quite beat-up from it, as anyone would be.” He added, “He’d put everything into the shoots and then go back to his room to isolate.”

“It never struck me as peculiar, but it was as if he gave everything to his work and then had nothing, zero, left for himself afterwards,” continued the source. “He was always very, very tried. He pushed himself extremely hard.” Bourdain was ultra dedicated to his work.

“Most producers and crew don’t work on every single episode, it’s just too much especially if you have a family. But that wasn’t an option for Tony. We never had any sense of depression or mental illness. He was not especially cheerful or engaging, off camera, but it was never rude or ill-intentioned. The guy was absolutely exhausted.”

Hydrating in preparation for a Balinese funeral . #PocariSweat

Born in New York City and raised in Leonia, New Jersey. He graduated from the Culinary Institute of America in 1978 and began working in various kitchens around New York City before becoming the executive chef at Brasserie Les Halles in 1998. He was divorced twice and leaves behind a daughter, Arianne, now 11.