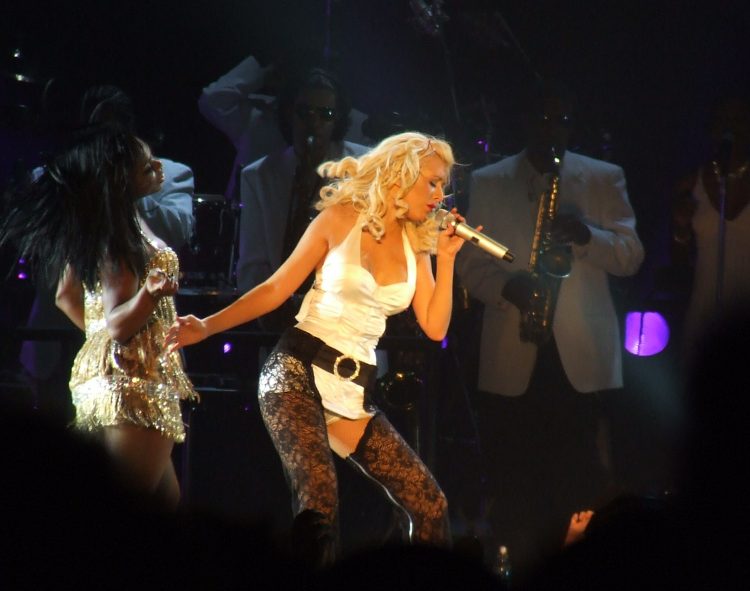 The 37-year-old mother of two graces the magazine’s cover with a fresh-faced look that shows off her pretty freckles — and her lovely pale blue eyes.

Inside the magazine’s pages, the Grammy winner appears in more stunning photos — and opens up about how “liberating” it feels to ditch the makeup.

“I’ve always been someone that obviously loves to experiment, loves theatrics, loves to create a storyline and play a character in a video or through stage,” Aguilera said.

“I’m a performer, that’s who I am by nature. But I’m at the place, even musically, where it’s a liberating feeling to be able to strip it all back and appreciate who you are and your raw beauty.”

Of course, fans know you can’t pin down the ever-changing Aguilera, who last week rocked a giant pink wig when she served as guest judge on the Season 10 premiere of “RuPaul’s Drag Race.”

So, it’s no surprise the Paper shoot also includes photos of the singer with thick mascara on her lashes and smudged blood-red lips. “I mean, I’m a girl that likes a beat face, let’s not get it twisted,” the singer quipped.

Christina launched her music career in 1999 and performed Genie in a Bottle and What a Girl Wants. In 2002, the former Mickey Mouse Club star went for a more daring style with the multi-colour hair, skimpy tops, and bottomless chaps to promote her album, “Stripped”.

In recent years, she has become a symbol and a dedicated ally to the LGBTQ community. But the singer revealed that she was constantly critiqued on her forward fashion choices, being called “skeezy” at times, and was met with a lot of disapproval after using her music videos to show her full support for the LGBTQ community.

“[New artists] don’t have as much backlash when they come out on the scene. And I did. It was a controversial time for me,” she said.

“Either women are not sexual enough or we’re not fulfilling enough of a fantasy for you, but then if we’re overtly sexual or feeling empowered in a certain kind of way, then we’re shamed for it,” she continued.

“Madonna had to go through it in her day, and she paved the way for my generation to come up. And paying it forward, now a younger generation is coming up and I’m loving what I’m seeing. It’s so incredible.”

In her personal life, Christina Aguilera is engaged to Matt Rutler and is the mother of two kids — Max Liron, 10, and Summer Rain, 3.