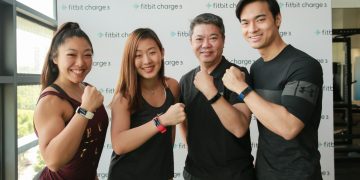 The Charge 3 fitness tracker, priced at RM728, is the latest device from the global wearables brand Fitbit, and while it is packed with many smart features as well as an impressive 7-day battery life, it is also a huge upgrade from its predecessor. For one, there is a larger display that is touchscreen-enabled. The Charge 3 also extends a swim-proof band this time around to complement its new swim tracking mode.

Just like the Charge 2, the Charge 3 remains sleek and stylish, except with a larger display that is more intuitive and touchscreen-enabled. This allows users to essentially view messages and notifications from the smartphone on the display in its entirety, do quick replies on Android, and access various apps simultaneously. There is also an inductive button that responds with haptic feedback, hence it doesn’t protrude out. Allowing you to take your health and fitness experience to the next level, the Charge 3 is packed with handy sensors and algorithms such as the PurePulse® heart-rate tracking with goal-based exercise modes, SpO2 for sleep tracking, female health tracking and not forgetting, the new swim tracking mode which allows users to check the time elapsed and calories burned on the device itself, and additional stats via the Fitbit app.

The lack of an on-board GPS is slightly disappointing especially since the Charge 3 follows after the release of the GPS-enabled Ionic smartwatch, though it connects seamlessly to the GPS system on the smartphone. The secure on-wrist payments function with Fitbit Pay is also an enticing feature, however it unfortunately hasn’t been made available for use within Malaysia.