Under Armour Takes Malaysia By Storm and Encourages Malaysians To #RuleYourself 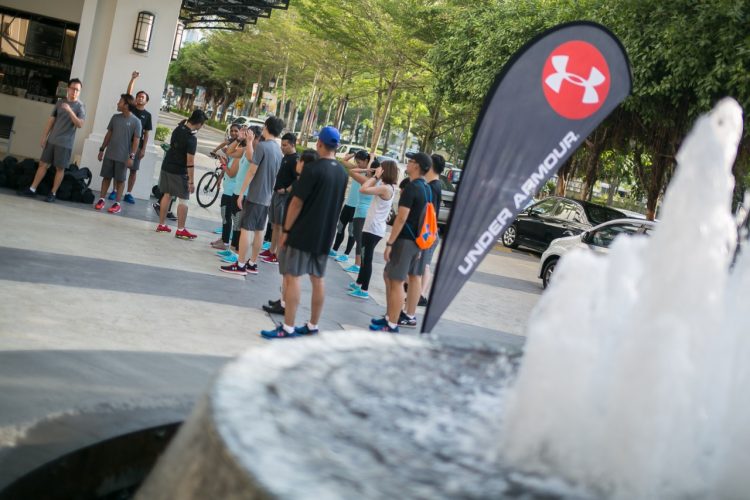 For those of you who are unfamiliar (because you live in a cave) with Under Armour, it’s an American sports clothing and accessories company. The brand has been around for a long time and when we say long, we mean 20 years and while they’re a major player in America, they only reached our shores last year. When I heard this news, I was obviously excited and I thought, “Just in time for my lifestyle change!” I vowed to start working out and hearing this motivated me even more, because what is a workout if you can’t do it in cute outfits?

Lucky enough, I soon received an invite for a media retreat to Penang on March 4th, where Under Armour opened a brand new house located in Queensbay Mall. But being a brand that’s an advocate for personal health and fitness, it wasn’t as simple as checking out the new Under Armour store and heading back home. No, no, no! In fact Under Armour showed us just how serious they are about their apparels by having the media members test out their latest apparel technology.

After a long ride from Kuala Lumpur to Penang, we were treated to a lunch date at China House, which by the way is a must-eat place in Penang. Once we filled up our stomachs, we were taken to our hotel rooms where we could relax and freshen up before going for a light jog. Or so I thought.

As I entered my hotel room, I was greeted with some of Under Armour’s latest apparel that I am to test during the light jog. Again, this is an understatement. I always love surprises and that’s exactly what they had in store for us. After getting dressed in our Under Armour getup, we were brought to a location where we’d get a hard introduction to what “Rule Yourself” stands for. We were immediately introduced to our personal trainers for the session, Jee and Ooi who were super nice but I knew that they had something up their sleeves and of course, I was totally right! That “light jog” we were promised quickly turned into bursts of sprints, bear crawls, lunges and all the things you can imagine that will make your body scream. While fighting the urge to vomit from exercising (because my body was clearly not used to this), I quickly noticed how the Under Armour apparel kept my body dry. Sure, there were beads of sweat trickling down my face and chest but overall, the brand has every right to boast about their CoolSwitch and HeatGear® technology because I was kept cool during the workouts.

After what seemed an eternity, we moved on from our gruelling but fun workout to a relaxing yoga session with yoga power couple, Robyn Lau and Hansen Lee, who helped members of the media to wind down and get to know our bodies’ abilities. And after both workouts, my body still felt relatively dry and this is amazing considering the entire thing ended up lasting almost two hours. As much as I make it sound like a complete challenge, and it was, the program that the team at Under Armour had planned for us ended up making our bodies feel especially good. Sore but the good kind. You can never regret a workout, especially if you’re wearing an outfit that helps you perform better while doing so! Of course, after a hard workout you most definitely deserve dinner and devour we did before calling it a night! After all, we had a long day ahead of us. The next day, after having breakfast while nursing our aching bodies, we visited Queensbay Mall where Under Armour’s brand new house resides. The store boasted a clean look, making sure that the focus is not on decor but on the apparels it had to offer. This doesn’t mean the interior of the store lacked style because it had all the right materials like wood and metal to create a very distinctive environment.

After being introduced to the store and doing some serious damage to my wallet, they rounded us up and we were ready to go home. All in all, I would say that the trip was an eye opener and pretty successful. A lot of brands do things just for the sake of it but with Under Armour, they practice what they preach. They’re not just about athletic apparel, they’re all for an active lifestyle and what better lifestyle to lead than a healthy and active one. And seriously, these guys don’t mess around!

Thanks, Under Armour for a memorable trip and for reminding us all that it’s always a smart choice to treat your body like a temple and to exercise regularly.