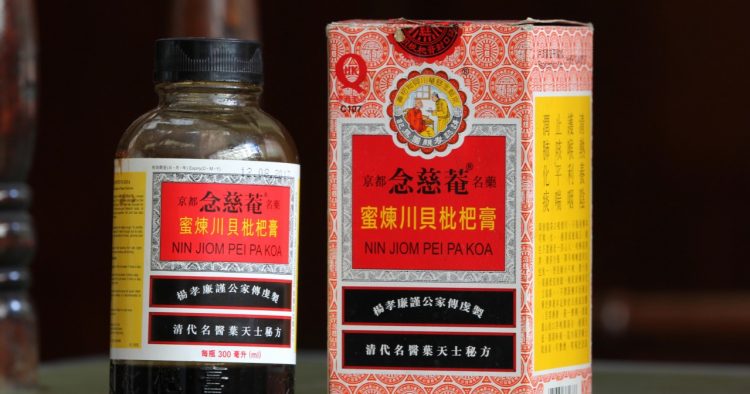 The dreadful flu season is back in the US, and a traditional Chinese cough syrup, called Nin Jiom Pei Pa Koa, has reportedly become highly-prized in a city battling its most challenging flu outbreak in years.

According to a report published by the Wall Street Journal last week, Mr Alex Schweder, an architect and professor of design at Pratt Institute suffering a cough for about 10 days, felt better 15 minutes after he drank a bottle of Nin Jiom Pei Pa Koa.

Try some Nin Joim . Good for sore throats. Chinese cough syrup. Just what the label says. Not my words.

It had been recommended by his girlfriend, who first learnt about the herbal supplement 30 years ago when she was living in Hong Kong. The medicine, which contains natural herbs, honey and loquat extracts, is sold on Amazon for $12.99 or $6 in New York City’s Chinatown for a 300ml bottle. It is also sold for as much as $70 online through third parties.

Riding a wave of popularity, the syrup distributed by Shenzhen-based Kingworld Medicines Group, has sent the company’s share price rocketing as much as 55% on Monday. Nin Jiom Pei Pa Koa is said to have been created during the Qing dynasty after a provincial commander asked the royal family’s doctor to cure his mother’s cough. The resulting syrup was a mix of natural herbs and honey. Nion jiom means “in memory of my mother”.

Those singing the praises of the cough syrup in the WSJ piece are not the only people in the US to have discovered the product. Singer Jason Mraz said in 2015 that he drinks “a shot” of the syrup with mint tea before performances and recommends the concoction to other performers.

Mom made me drink a chinese cough syrup that tastes like Jäger????

Them: "Hey DJ what are you doing today?"
Me: "Oh you know, just chugging Chinese cough syrup and shouting battle cries in my bedroom"

Apparently it's a Chinese sore throat/cough syrup. If it's as effective at treating a hoarse throat as people say it is, i've gotta try it