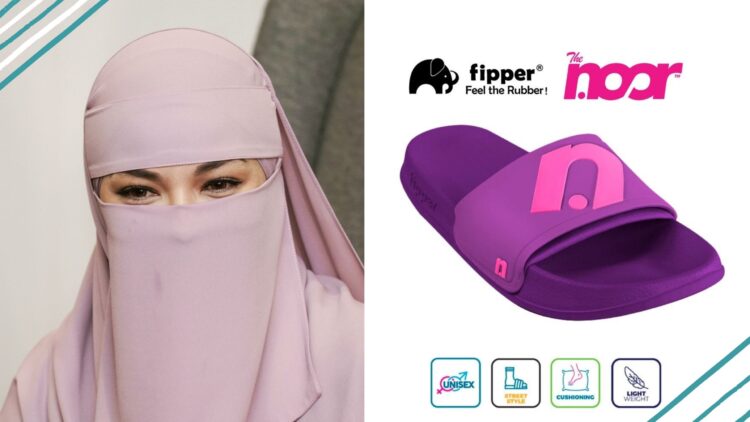 Newlywed, the bride of the year Neelofa was showered with a foul of comments from netizens due to the release of her new collab with Fipper, under the tagline “Muslim Friendly” sandals, costing up to RM75.90!

Localities were furious about how a normal rubber sandal can be “Muslim Friendly” when sandals are entirely just made from rubber. Fipper has finally moved forth to clarify the situation on the recent drama surrounding their new partnership project with local celeb Neelofa, after receiving huge backlash from the public.

The local footwear brand announced in a statement posted to its official social media accounts that the fashion piece, the “Fipper x TheNoor” slip-on sandals, is made in the image of a Muslim woman.

Given the company’s explanation, local netizens have persisted to denounce Neelofa and the footwear label for allegedly abusing the religion with their “Muslim-friendly” description. Some have also made matters escalate further by disagreeing on the sandal price, commenting that it is “expensive”! Looking through the market with leading footwear brands like Flip Flop and Havana having ordinary flipflops priced at RM100 and above spiking up to RM300 even, with people still purchasing them nevertheless! So this is definitely not a matter to be pointed out about folks.

Based on my interpretation on the matter, those sandals were solely made to be easier for Muslimahs to wear, intending to provide them with better comfort especially when they have got socks on for a better grip. It can be quite uncomfortable for Muslim women to slip on ordinary slippers cause they can be slippery at times, plus it’s lightweight aiming to make walking easier for them. Keyboard warriors have just turned an ordinary sandal launch into a whole lot of racial dispute presumably due to misunderstandings.

Come on folks, I believe we have better issues to be battling about rather than on a pair of slippers… Appreciate Fipper’s rectification on this matter, by releasing an open statement to the public enlightening them better on the purpose of these slippers!