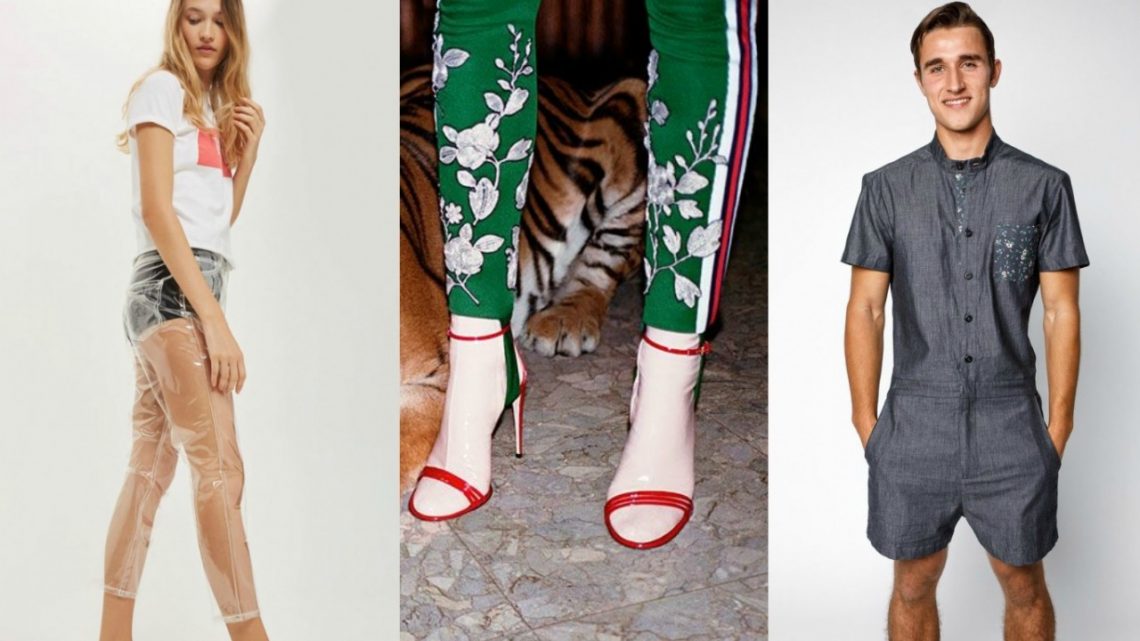 2017 was a year of suprises, and the fashion world followed suit. Some trends, like the rise of “athleisurewear” and the return of ruffles, were welcome additions. But other fashions left us shuddering, especially after models began sporting them on the runway, or style-stars started embracing them with open arms.

Check out this year’s roundup of the absolute worst fashion fads of 2017, and pray hard that they won’t sneak into the New Year:

Making their debut just in time for summer 2017, male rompers were the male fashion trend no one was expecting. And I mean, no one. There’s even a collection of Christmas and Hanukkah-inspired themes for the holiday party season. Is this a genius invention? This versatile pouch showed up as a perfect place to store beer — but the hairy belly does look a little gross. Unless you’re Jude Law. He can do no wrong. Jeans are the perfect garment — utilitarian, cool and versatile. Yet designers spent 2017 trying their best to ruin them. In fact, Kendall Jenner was spotted sporting one of them recently too.

Introducing Villa Italian Kitchen’s Pizza-Kini: the world’s most mouthwatering bikini! Now you can wear your favorite pizza! For just $10,000, we’ll set you up with our food stylist and help you get fitted for your own suit made from only the freshest ingredients, including homemade, hand-braided dough, 100 percent whole milk mozzarella cheese, sauce made from fresh California tomatoes and delicious pepperoni – all in honor of #NationalBikiniDay. Just message us to get started, but hurry – the most delicious swimwear on Earth is available in limited quantities and available for order on July 5 only! #VIK #Pizzakini . . . . . #pepperoni #pizza #pizza🍕 #pizzeria #pizzatime #pizzalover #italian #italianstyle #italiancuisine #garlic #foodstagram #mozzarella #cheese #food #foodporn #foodie #foodofinstagram #villaitalian #spaghetti #wings #foodcourt #lunch #lunchtime #delicious #nofilter

For one day only, pizza chain Villa Italian Kitchen sold a two-piece swimsuit made entirely of real dough, cheese, sauce and pepperoni in what they dubbed as “the world’s most mouth-watering bikini.” It was also probably one of the most expensive, too, at $10,000.

Sure, clear boots looked cool when Rihanna rocked them, but have you ever tried these on? Your nasty sweaty feet will fog them up almost immediately. Whoever thought wrapping feet with plastic and adding a four-inch heel was a good idea, should be sued. A fashion house known for being a troll-master, Balenciaga did not fail to baffle the crowd when they first showcased these babies at a fashion show. Their take on the already ridiculously heinous Croc design was so bad, I originally assumed they were only created to inspire memes. Maybe they were. IDK. Have fun looking like a redneck ’70s Barbie!

Who wore it better? Balenciaga or IKEA? pic.twitter.com/LCB9Qri2xN

Copycats. Plagiarism in fashion is not new, but this particular blue bag created by Balenciaga eight months ago sure looks a lot like IKEA’s Frakta utilitarian bag — which retails RM2, whereas the expensive knockoff is selling at $2,145 (approximately RM9441.43) each.

The theme for Moschino’s Fall/Winter 2017 show in February was literally garbage. Models walked down the runway in cardboard box getups, feather-duster headpieces, and toilet-paper purses. Fashion. It’s the sh*t yo!

Clear fashion was really “in” this year for reasons I can’t begin to fathom. First, Topshop released “clear knee” jeans in March — and then, a month later, it went a step further by making pants entirely plastic. I guess it would look cool if you’re going to art/music festivals. But on normal days.. please don’t. What a bizarre fake footwear. The Gucci Ilse patent 110mm sandal features a fake latex sock that goes all the way up the calf, and makes you look strange, but I guess that’s fashion! And if you want to be fashion, you’re gonna have to shell out $1,390 (RM 5667) for the privilege. That’s right — who cares about rent.. or food?