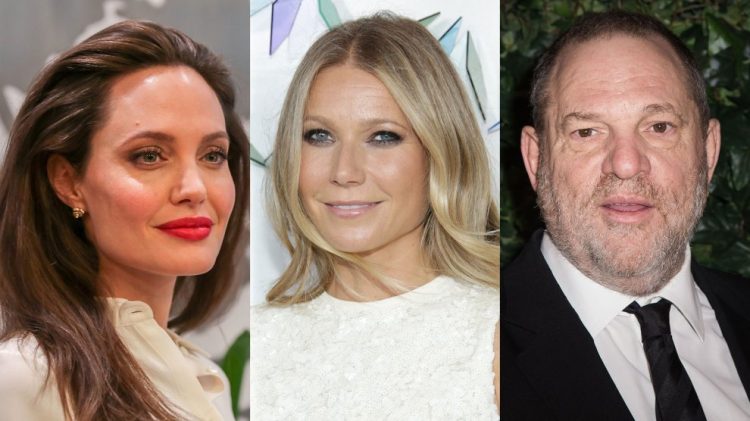 In more Harvey Weinstein news, both Gwyneth Paltrow and Angelina Jolie have accused the disgraced Miramax and Weinstein Co. mogul of sexual harassment.

Paltrow told The New York Times that at 22, Weinstein directed her to head to his hotel room for a meeting shortly after she was cast in Emma. The meeting began uneventfully, but ended with Weinstein “placing his hands on her and suggesting they head to the bedroom for massages,” said Paltrow. “I was a kid, I was signed up, I was petrified.”

She refused his advances, she said, and confided in Brad Pitt, her boyfriend at the time. Mr. Pitt confronted Mr. Weinstein, and soon after, the producer threatened her not to tell anyone else about his come-on. “I thought he was going to fire me,” she said.

When Mr. Weinstein tried to massage her and invited her into the bedroom, she immediately left, she said, and remembers feeling stunned as she drove away. “I thought you were my Uncle Harvey,” she recalled thinking, explaining that she had seen him as a mentor.

According to the Times, Pitt reportedly approached Weinstein at a theater premiere and “told him never to touch Ms Paltrow again,” an account of events which Brad Pitt confirmed through a representative. Paltrow went on to tell the paper that Weinstein called her shortly after the Pitt incident and “screamed at her for a long time,” berating her for discussing what had happened. “It was brutal.”

Jolie on the other hand told the Times that Weinstein made unwanted advances on her in a hotel room in the late 1990s. “I had a bad experience with Harvey Weinstein in my youth, and as a result, chose never to work with him again and warn others when they did,” she said in an email. “This behavior towards women in any field, any country is unacceptable.”

Paltrow and Jolie’s are the latest in a series of allegations made against the legendary producer that started last Thursday following a New York Times investigation on Harvey Weinstein. The report detailed allegations dating back three decades from multiple women including Rose McGowan who now spearheads the Weinstein Resistance.

Meanwhile, Harvey Weinstein’s Marchesa designer wife, Georgina Chapman, also released a statement earlier today where she announced that she was leaving her husband as he continues to face sexual harassment allegations.

My heart breaks for all the women who have suffered tremendous pain because of these unforgivable actions,” Georgina said in a statement to People. “I have chosen to leave my husband.” She continued, “Caring for my young children is my first priority and I ask the media for privacy at this time.”

The couple, who married in 2007, have two children together.