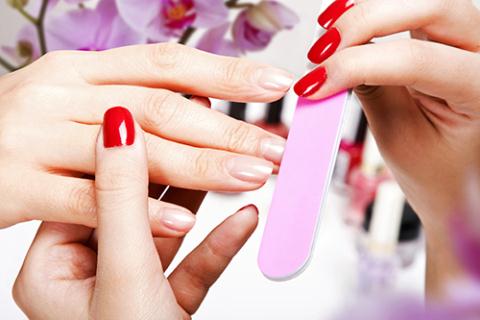 It’s downright frustrating when you’re at a nail salon trying to pick out a colour from a ton of colour wheels or charts laid out in front of you, and it’s far worse when you’re perpetually indecisive and can’t seem to make up your mind.

Besides, who knows what that exact shade would look like against your skintone? You can’t exactly have a do-over without having weird looks from your manicurist, and if it’s with gel polish, just banish the thought already.

How to test nail colors at the nail salon: pic.twitter.com/XvdbedSuyf

Well, one Twitter user, Emma Young, just came up with the perfect effortless solution for this predicament – creating custom Snapchat stickers to ‘try’ the nail polish on her hand.

Young says, “I was looking at the nail options, and the nail salon I go to has them glued inside the book so you can’t put your finger under it to see how it looks.”

She then chose a colour, took a photo of the fake nail that was painted in that colour, then used it as a sticker to try it on. She also adds that the whole process takes less than a minute!

So simple, but genius indeed!! Her viral tweet has now gained over 91,000 retweets and 259,000 likes in just two days, so clearly, other people face the same damn problem every time at the nail salon too.