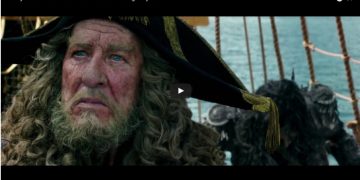 Pirates of The Caribbean: Salazar’s Revenge Takes You On A Familiar Yet Mediocre Ride

Pirates of The Caribbean: Salazar’s Revenge Takes You On A Familiar Yet Mediocre Ride

After the 2011 stand-alone sequel, On Stranger Tides, the PoTC series returns to its original story line with epic graphics and a young sailor named Henry (Brenton Thwaites), who has to break the curse upon his father William Turner (Orlando Bloom, remember him?) by locating the mythical Trident of Poseidon.

The plot gets rapidly muddled as the adventure finds Captain Jack feeling the winds of misfortune blowing strongly his way when deadly ghost sailors, led by the undead Captain Salazar (Javier Bardem), escape from the Devil’s Triangle and he’s hell-bent on killing every pirate at sea-notably, Jack. For obvious careless Jack reasons.

Jack’s only hope of survival lies in the legendary Trident of Poseidon, but to find it he forges a tough alliance with a budding astronomer Carina Smyth (Kaya Scodelario), and Henry. Oh, the pirate Barbossa (Geoffrey Rush) shows up too, as per always. But he’s fancier now and his curly weave is on point.

If I’m being completely honest, the storyline isn’t anything we’re not used to. The pirate movie narrative worked well with the original trilogy but it started to falter with Salazar’s Revenge‘s predecessor, On Stranger Tides, which, by the way, was the most expensive movie ever made with a staggering $410 million bill. It still collected a cool $90 million debut but we can all agree that the only person that gave that movie life was Penelope Cruz.

It feels like directors Joachim Ronning and Espen Sandberg may have forgotten a thing or two about high-sea adventures. I mean, sure, Jack Sparrow still stumbles in misfortune (or carelessness) and is still fluent in drunken slurs, which did inject quite a bit of fun. But it does feel like they’re throwing everything they can on screen to grasp at your attention. Even Jack’s uncle (Paul McCartney) makes a cameo in the film for no good reason.

However, I do have to admit that Salazar does emerge as the film’s most powerful creation. The undead sea captain with strands of hair swirling around his skull was played by Bardem with as much rigour as wife Penelope Cruz did (if not more) as Angelica in At World’s End.

Will Dead Man Tells No Tale be the last we’ll see of the Pirates epic? I highly doubt it. They’ve already brought in a league of younger characters to keep the franchise going with Henry Turner, son of Orlando Bloom’s William Turner, and Kaya Scodelario taking Keira Knightley’s place as the young, headstrong feminist character made so perfect for Henry because a girl can never just exist without being romantically inclined in a Pirates epic.

If you’re looking to watch a great Pirates epic and believe that the Pirates of The Caribbean: Salazar’s Revenge will take you on that riveting ride that we all know and crave, you might find yourself sorely disappointed. If you’ve got two hours to spare, catch Pirates of The Caribbean: Salazar’s Revenge while you can. The graphics are pretty amazing so be sure to catch it on IMAX 3D to make it worth your while.

Pirates of The Caribbean: Salazar’s Revenge unveils in cinemas today, 25 May 2017.