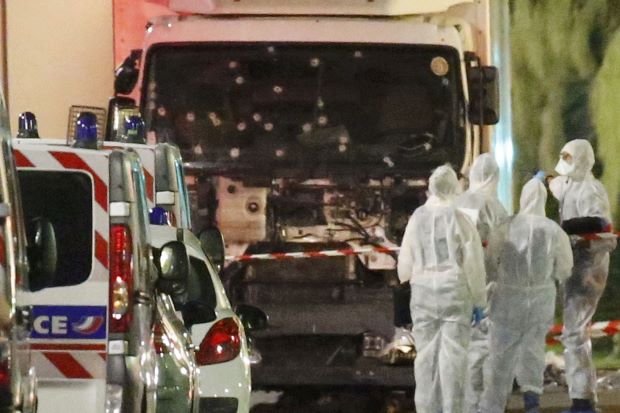 A truck ploughed through a crowd during the Bastille Day ceremonies late Thursday in the French Riviera city of Nice, France, killing more than 80 people and injuring dozens others. The act of terror occurred where people had been watching fireworks by the seaside and were walking by Promenade des Anglais.

A witness said the truck driver seemed to have accelerated toward his victims. The driver – a 31-year-old French citizen born in Tunisia – was later killed by French police. It was discovered that his truck was loaded with weapons and hand grenades.

A witness, Esther Serwah, 59, said: “I was just walking to the Promenade and then I saw everybody running and I just didn’t know what was going on. People were screaming at me in French but I didn’t understand.

The truck apparently went in zig-zag motions, ripping through everything like poles and trees.

Videos and photos of bodies sprawled across the streets, people wailing and others rushing to help those who’re injured have surfaced on the Internet. It is beyond horrifying..

During the attack, many fled to nearby hotels, restaurants and toilets for cover.

Meanwhile, IS supporters are celebrating the attack in Nice, with one tweeting: “The number of those killed had reached 62 french crusaders and sinful infidels in Nice, France … God is great, God is great.”