Congrats to Mary-Kate Olsen on being Mrs. Olivier Sarkozy.

In case your memory needs refreshing, Mary-Kate is one half of the Olsen twins from Full House. Yeah, those twins! All grown up and now one of them is married!

The 29-year-old actress and designer married her longtime boyfriend, French Banker Olivier Sarkozy who is 46 years old. The two exchanged their vows in New York City, according to Page Six.  In a private ceremony at their home, the couple tied the knot in front of an intimate crowd of 50 guests.

According to a source, the wedding was super chic with “bowls and bowls filled with cigarettes, and everyone smoked the whole night.” Sounds, err, fancy! We don’t know who was on the guest list but Elizabeth Olsen, sister to the Olsen twins did mention to E! News that the family were planning to get together for Thanksgiving.

This is the first marriage for the actress and the second one for Sarkozy. 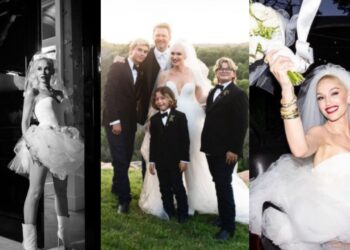