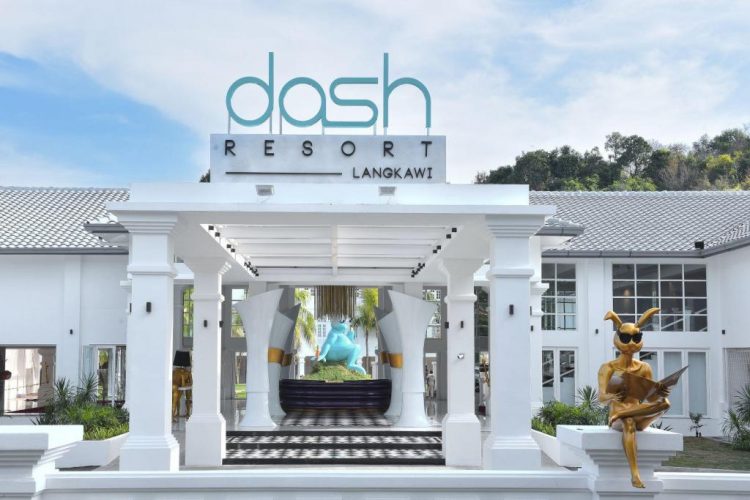 The archipelago of Langkawi admittedly isn’t quite the unspoiled paradise as it once was, but its indigenous allure of geological wonders remain indisputable and the UNESCO Global Geopark status bestowed upon this tropical island is a solid testament. Amidst the controversial overdevelopment tainting its grounds, a recent visit to this little slice of idyll and stay at Dash Resort Langkawi assured us that it would only be a matter of time before its catalytic revival.

Commandeering a quiet strip along the Pantai Tengah stretch previously home to The Lanai Resort, Dash Resort Langkawi is doubtlessly charming from the get-go. The property is, after all, nestled only a brisk extension away from Langkawi’s busiest beach town Pantai Cenang, yet it affords equally breathtaking views of the Andaman Sea while being delightfully tucked away from notorious water sport operators and massive crowds. Now, this isn’t another run-of-the-mill chain hotel experience as Dash Resort Langkawi extends anything but. Its distinctive personality exhibited through a clean and uplifting colour palette of white and teal marries colonial and island appeal with a little dash of whimsy a la Alice in Wonderland. The result is a quirky retreat adorned with bold, playful accents that puts an emphasis on cheekiness as much as it encourages complete respite. The 108-guest room beachfront resort boasts five tiers comprising a two-bedroom villa, deluxe rooms with terraces and jacuzzis, garden rooms as well as entry-level studios. Aside from basic amenities fitted within the guest rooms, most of the complementary furnishings and fixtures are one of a kind and thoughtfully custom-made by independent designers, adding a refreshing touch that is more than welcomed in this competitive day and age. All the guest rooms are unequivocally unique, however the Dash Jacuzzi and Dash Garden rooms are particularly enticing. All seven Jacuzzi rooms are indeed built for royalty with outdoor jacuzzis and open terraces that command a spectacular seascape sans any obstructions, whereas the latter, featuring outdoor jacuzzis and lush, verdant patios, are nothing but soothing oases of privacy waiting to be indulged in. Not only does its colour palette resemble that of Santorini in Greece, taking a stroll around the property proves to be just as tranquil and inviting. It would take an absolute will of steel to resist taking a dip in the majestic infinity pool with water cascading down its glass edge right along the pristine coastline, complete with cabanas and sun chairs dotted around for lazy lounging. With family travel in mind, there is a separate children’s pool area. The white sands and turquoise waters of the Andaman Sea evidently calls for some beach bumming, and should peckish feelings strike midway through that path of rejuvenation, Dash Resort Langkawi’s main F&B all-day dining outlet Mya Kitchen & Cocktails is all the more ready to serve up both modern Asian and gratifying Western cuisines that tantalise the taste buds, besides the tasty tipples that urge the clinking of glasses more than once. In line with letting loose, the Rabbit Hole Spa is the perfect stop to recharge and revitalise the mind, body and spirit as on offer are deep tissue massages and beauty treatments. A word of warning – Reservations must be made in advance due to the availability of only three couples’ massage rooms. Alternatively, hit up the Mad Tarte Patisserie for midday hi-tea, the Flex Gym for the day’s worth of exercise or the Dashshoppe for exclusive Dash merchandise. With Dash’s signature fluffy island-hopper mascot taking centerstage alongside action hero paintings lined up against the walls as well as psychedelic backdrops at every corner, any avid feed-flicker will concur of Dash Resort Langkawi’s strong ‘gram game. It’s trendy, aspirational and instantly recognisable – exactly the magnetism it needs to lure not only millennials but all sorts of travellers such as families and couples.

Dash Resort Langkawi, owned by Ri-Yaz Hotels and Resorts, certainly breathes new life into the duty-free island by upping the ante in the hospitality industry. Beyond Langkawi, other Dash Hotels are located in Cyberjaya and Bali, with several upcoming properties in the Kuala Lumpur city centre, Melaka and Penang. Its biggest leverage? Every Dash Hotel is themed according to its given setting and presents a whole new escapade waiting to be unraveled.