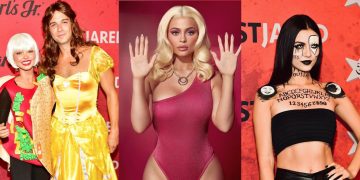 We may not be that big on Halloween in this side of the world, but that doesn’t mean we can’t get in on the action and pry over what our favourite celebrities are dressing up as to celebrate. The costumes just get better year after year, and we’ve picked out some of the best:

Have you ever seen a more perfect Barbie? Yeap, that’s Kylie Jenner dressed as the iconic doll, complete with a box.

Heidi Klum is the queen of Halloween and this year, her costume involves a lot of green. She dressed up as Princess Fiona from Shrek!

Ima get Halloween started for you the right way… postttyyyyyy I LOVE YOU BRO @postmalone…ratatatatataata wassssss gooood!! And this is also a BIG thank you to getting me to 14 million!

Damn! Songstress Rita Ora literally took it to the next level with the faux face tattoos just so she could pass off as Post Malone.

Another celebrity who was dressed in green? Halsey as sexy Poison Ivy.

Nina Dobrev took her A Star Is Born costume quite literally with some accessories, including a playpen and mic.

If there’s anything better than Taco Bell, it’s Taco Belle.. Sarah Hyland and her boyfriend Wells Adams killed it.

Did you just do a double take? Yeap, that’s Ariel Winter dressed up as Pamela Anderson, beside her boyfriend Levi Meaden.

vote for me, and all your wildest dreams will come true.

We never knew an Ouija board could look so good until Victoria Justice showed up looking like this.

Thank you @VictoriasSecret for sending us actual runway looks and real wings to borrow for the night!!! OMG a dream come true! Got to be a Victoria Secret Angel for the night! And Kendall got good practice lol

Finally, who could forget the Kardashian-Jenner clan who made up as Victoria’s Secret Angels complete with wings?