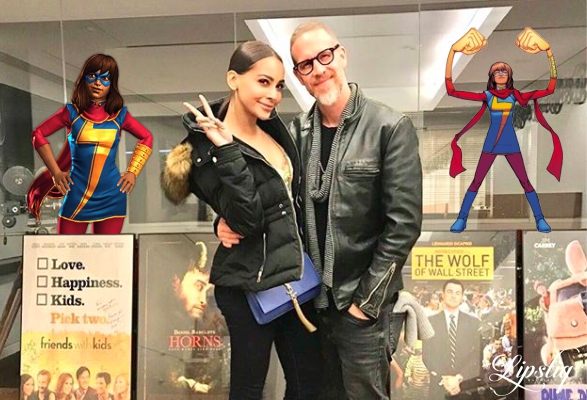 Not too long ago, gorgeous actress Raja Ilya boasted that she has successfully bagged a role in an upcoming Marvel project, which required her to make some enhancements on her body. She claimed that the movie was scheduled to set in motion starting from December 2017 or sometime in early 2018.

In October 2017, the starlet unveiled that she has already received the script for the Marvel film, but refuses to spill any details as she is bound by her agreement with Marvel Studios, which states that the project will only be announced by the studio itself soon.

Well, looks like the wait is almost over because last week, the Ipoh-born beauty, also known by her real name Raja Ramilah Begum Raja Mohammad, has begun her journey to Los Angeles in which we hope will be for the much anticipated, contentious Marvel project.

When talking about her preparation to film the movie, the 33-year-old actress mentioned that she has put out a large budget for the trip but sees it as an investment to make a name for herself at the international level.

“The money that I take out from my own savings will be used for the flight tickets, daily expenditure, and also the hotel booking for the period that I will be there.” She continued, “I do not see it as a waste for it is an investment that I am willing to make in creating a name overseas.”

Each day holds a surprise. But only if we expect it can we see, hear, or feel it when it comes to us. Let's not be afraid to receive each day's surprise, whether it comes to us as sorrow or as joy It will open a new place in our hearts, a place where we can welcome new friends and celebrate more fully our shared humanity. He's one of the best person I've ever met ,thanks @joeymcfarland .❤️ #work #losangeles #positivevibes #thinkpositive #hollywood #malaysia #rajailya

Meanwhile, Cinema Blend reported that Raja Ilya is also looking to go for auditions in Los Angeles to try out her lucks, which kinda explains why she was pictured with American film producer, and co-founder/Vice Chairman of Red Granite Pictures, Joey McFarland.

In case you missed it, Red Granite Pictures is the studio house that produced the award-winning film Wolf Of Wall Street played by Leonardo Di Caprio, with Najib Razak’s stepson Riza Aziz acting as the registered Director.

Riza Aziz and Joey McFarland enjoyed a special mention of thanks in Leonardo Di Caprio’s acceptance speech for the movie which their company famously bankrolled to the tune of $100million. “Thank you Joey, Riz and Jho for not only being collaborators but for taking a risk on this movie”, said Di Caprio.

Jho Low has been singled out for special thanks by Red Granite for Wolf of Wall Street, with a full screen credit all to himself, which features at the end of the New York-based film, straight after the main titles.

Aside from receiving praise for the risky movie, the Hollywood establishment has picked up on other noteworthy and highly unusual gestures, including Malaysia’s controversial 1MDB embezzlement and money laundering cases.

Jho Low’s legendary partying has also formed the backdrop to the Red Granite production experience, say insiders. “These guys party all the time. About once a month they go off somewhere like Vegas and party hard with Leo and their friends. Jho Low pays for the private planes and the gambling chips. There’re always crowds of available women”.

Anyway, do you have any idea on which character will Raya Ilya play in the upcoming Marvel project?

Some fans have speculated that she might get the role of Kamala Khan, also known as Ms Marvel, who is the first Muslim character to headline her own comic book in the franchise. Pretty cool, huh?