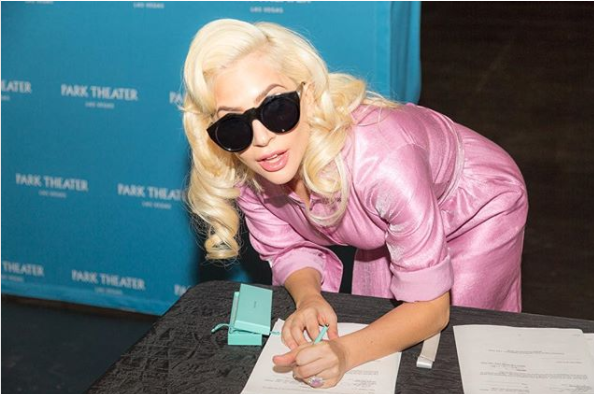 The pop star announced a few hours ago via Instagram that she’ll be headlining her very own residency in Las Vegas at the Monte Carlo Hotel & Casino’s Park Theater. Gaga will begin her two-year run in December 2018 with performance dates and ticket information to follow in the coming months.

Dolled up in a satin pink to sign on the dotted line, the star thanked MGM’s executives for helping her$100 million dollar (RM 407.4 million) deal of a lifetime. “Thank you Richard, Bill and Chris for making my dream come true! I was made for this town, and I can’t wait to light up the Park Theater like never before!”

Rumours about the “Million Reasons” artist’s major gig have been circulating for months, and Gaga’s confirmation comes a day after wrapping up her world tour in L.A.

The star also said in a statement, “It’s the land of Elvis, Tony Bennett and Frank Sinatra, the Rat Pack, Elton John, Judy Garland and Liza Minnelli. It has been a life-long dream of mine to play Las Vegas. I am humbled to be a part of a historical line-up of performers, and to have the honor of creating a new show unlike anything Vegas has ever seen before. Thank you to my fans for always believing in me. Meet me in Las Vegas baby, we did it!”

Thank you Richard, Bill and Chris for making my dream come true! I was made for this town, and I can’t wait to light up the Park Theater like never before! 💝

In September, the “Million Reasons” songstress was forced to postpone the European leg of her tour over “severe physical pain” related to a 2013 hip injury and a years-long battle with chronic pain. She resumed her tour two months later. Her performance of “The Cure” was also broadcast live at the 2017 American Music Awards.