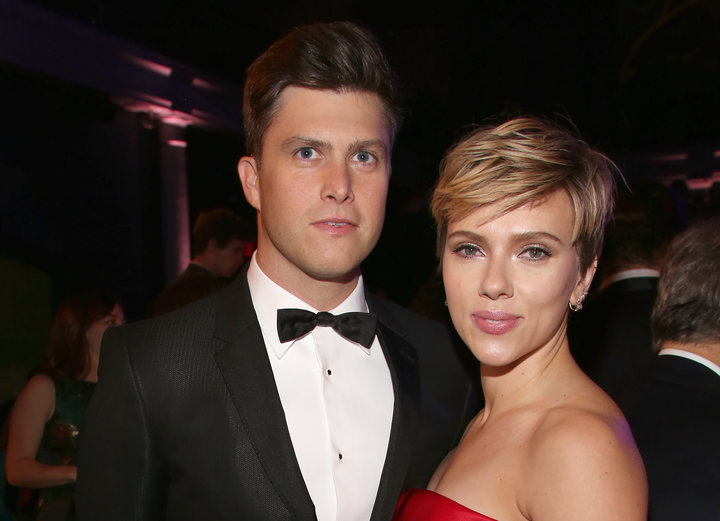 Scarlett Johansson has a new boyfriend (and he’s probably not who you’d expect)!

Rumours that the actress and Saturday Night Live’s writer/cast member/host Colin Jost were hanging out had been circulating for months, but the two finally stepped out together at the American Museum of Natural History Gala last Thurs.

Because you know.. getting photographed by the papz is the equivalent of going “Facebook official” for Hollywood celebs.

In September, Colin opened up on his relationship with Scarlett, saying, “She’s pretty cool. It’s hard to have a lot of complaints, she’s pretty awesome. I’m very happy. I feel very lucky.”

He was then asked if she has a funny side to her, to which he responded, “Of course. The first time she hosted (SNL) was the first year I was a writer on the show. So, we’ve kind of known each other since then.. she’s the best.”

By the looks of it, Scarlett, who wore a vintage YSL red tuxedo dress at the fundraising event, is equally smitten with the SNL cast member too.

A source close to the couple disclosed, “Scarlett likes to be in love and has not changed a bit in that area, Colin is good for her because she likes smart men, especially writer types.” The source continued, “She is a very bright girl and always searching for that perfect match”.

Still, Johansson has given marriage a couple of tries. Before Romain Dauriac, she was married to fellow actor Ryan Reynolds from 2008 to 2011.

With that said, we wish all the best to #ScarJost! (PS: We see you Colin 😍)