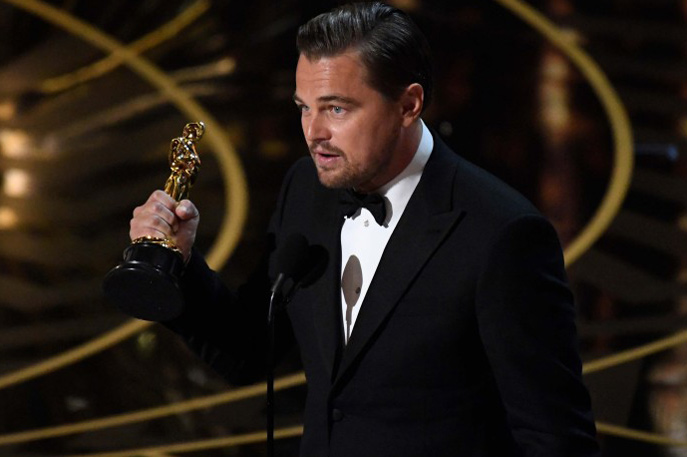 For the last 12 years, you, me and the entire human race were baffled by the fact that Leonardo DiCaprio-despite being nominated many times and for many great roles- has not won a single Oscar. Think about it; Shutter Island, Inception, The Aviator, The Wolf of Wall Street, what else does Leo gotta do to win an Oscar?

All of that ended today. Mr. DiCaprio finally bagged an Oscar his performance in The Revenant as hunter and explorer Hugh Glass. While most of us cried tears of joy, Kate Winslet’s reaction towards the win was the best – she seemed so genuinely happy and eyes all welled-up! Leo also beat the likes of Matt Damon (The Martian), Michael Fassbender (Steve Jobs), Bryan Cranston (Trumbo) and 2015 Best Actor winner Eddie Redmaye (The Danish Girl) to win the award. Upon receiving the award, he did not brag about his well-it’s-about-freaking-time Oscar, instead, he addressed global warming and climate change.

“Climate change is real. It is happening right now. It is the most urgent threat affecting our entire species,” Leo said.

Well, congratulations, Leo, we can now die in peace.