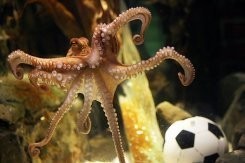 The legendary Paul the octopus that successfully predicted the last World Cup soccer games has just passed away at the age of 2. During the last World Cup, Paul achieved international notoriety by correctly predicting all the 7 matches Germany, the country the octopus is from, and even the final match when Spain won Netherland. Many tried to copy the legendary Paul by claiming that their pets can predict who the winners will be in several World Cup matches but they all failed.

No funeral has been arranged for Paul yet but Stefan Porwoll, Director of Oberhausen Sea Life Center in Germany said that the deceased will be kept in a cold storage until they decide how to memorialize him.

“He appears to have passed away peacefully during the night, of natural causes, and we are consoled by the knowledge that he enjoyed a good life,” said Steven Porwoll.