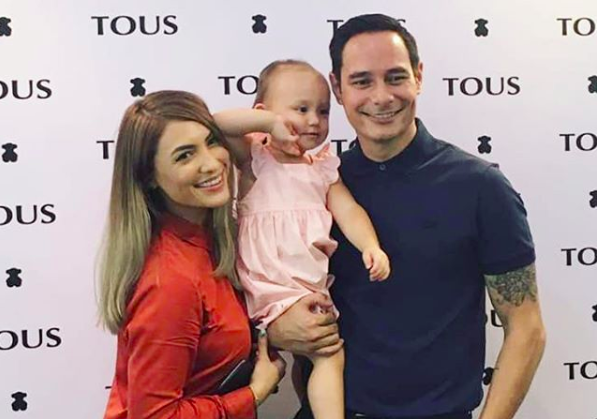 In a perfect world, separated or divorced parents work together tirelessly in order to co-parent the best they can for the sake of their children’s wellbeing and happiness. But of course, most people get separated from not being able to see eye-to-eye, and many well-intentioned parents get sidetracked from successfully keeping their kids out of their personal conflicts.

Today, we got word that Malaysian TV personality and DJ Patricia Knudsen, who was once named as FHM’s Most Wanted Woman back in 2012, allegedly filed a kidnapping charge against her former flame, DJ and TV host Joey Ghazlan over an ongoing squabble involving their 2-year-old daughter Sophia

The couple, who have had an on-again-and-off-again relationship for about 10 years now, have finally called it quits a few months ago — but it doesn’t end there.

Simply put, Patricia K has found a new flame and insisted for little Sophia to be introduced to him. Meanwhile, Joey G who is evidently, and vocally, against the idea, has been accused of allegedly physically abusing the mother of her child on many occasions.

What children of divorce most want and need is to maintain healthy and strong relationships with both of their parents, and to be shielded from their parents' conflicts. . Some parents, however, in an effort to bolster their parental identity, create an expectation that children choose sides. . In more extreme situations, they foster the child’s rejection of the other parent. In the most extreme cases, children are manipulated by one parent to hate the other, despite children’s innate desire to love and be loved by both parents. . A child needs both parents. (Unless of course, the parent is abusive and creates more harm than good to the child).

We’re unclear of what’s really been going on, but the drama got so intense that Daphne Iking, fellow TV host, decided to chime in on the issue via Instagram, obviously directing the message to Joey.

In two Instagram Stories, Daphne wrote, “In most extreme cases, children are manipulated by one parent to hate the other, despite children’s innate desire to and be loved by both parents.” She continued, “Moving on with a new partner does not mean the mother is bad, or that she cares less for her child.” In light of this, whether you’re a prominent figure or not and whatever the issue may be, it should always be reminded that children have got nothing to do with a dispute between their parents and keeping them out of the crossfire is always necessary, no matter the outcome.

Think of what’s fair for the kids, not yourselves

Even if you feel that your rights have been breached in some way or another, more often than not what’s fair to the parents isn’t really doing much for a child.

A majority of kids with separated parents do well

Most of them who end up doing poorly have been exposed to detrimental parental conflicts or have been alienated from either parents. As long as you can insulate your kids from the conflict, it’s likely that they’ll turn out fine.

If you make it a test of loyalty, children will feel as if they’re only allowed to love one parent, and should they also love the other, it’s going to be a betrayal towards the first parent. That’s not right for anyone, even adults.

Raising kids is tough as it is, but you may as well render your efforts useless should you pull immature moves and use them as a weapon in your separation. Doing so may interfere with their social development and risk causing them future problems such as having depression at a young age.