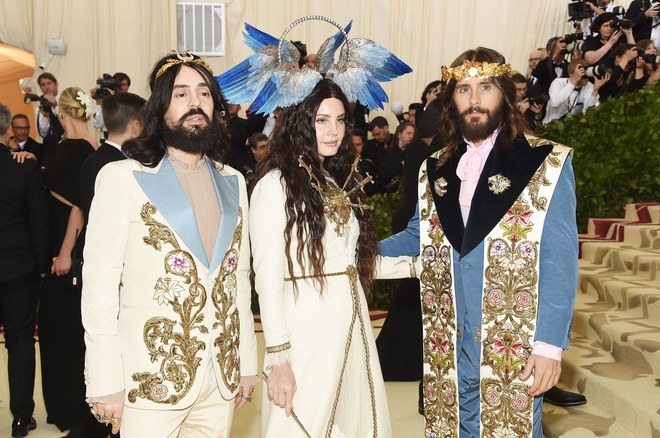 Called “the party of the year,” and “the Oscars of the East Coast” — the Met Gala, always held the first Monday in May, is a chance for stars to push the limits of fashion — and credit lines. Tickets cost $30,000 each. A table goes for $275,000. All proceeds go to the Metropolitan Museum of Art’s Costume Institute, the only curatorial department at the museum that funds itself.

What happens inside is a secret as posting on social media has been banned from the red carpet. After cocktails, they are called in to dinner, and there is always some form of entertainment. (Last year, it was Katy Perry.)

Now, let’s talk about who wore it best at the red carper according to this year’s “Heavenly Bodies: Fashion and the Catholic Imagination” theme. A lot of thought was put into every detail to ensure Katy met the theme accurately. From the spangly mini dress that some scholars believe Mary wore on the evening she was turned away from that inn right down to the gigantic wings which is identical to the one that Pope Francis has, handed down over centuries. He wears them when he’s chilling around the Vatican.

OH YAS! Our queen Rihanna reigns over the #MetGala red carpet looking like the Pope, and people are losing it 💕 The singer, who is co-hosting the gala with Anna Wintour, Donatella Versace and Amal Clooney, and has earned a reputation for being among the best-dressed — if not the very best — every year. Sarah Jessica Parker is never one to take the Met Gala theme lightly, which is this year, the actress once again went above and beyond with her interpretation of the theme in a stunning Dolce & Gabbana look.  SJP wore a gilded gold gown featuring red heart accents and the most incredible train. Cardi B attended her very first Met Gala tonight and her gown was nothing short of exquisite. Her skin tight silhouette designed by Moschino accentuated her growing baby bump — honestly, very Catholic if you ask me — and was drenched in pearl and jewel beading. Gucci’s Alessandro Michele, Lana Del Rey, and Jared Leto arrived together in a trio of looks by the designer. Leto’s ensemble includes a gold embroidered stole similar to a priest’s vestment, and the songstress accessorised her gown with a giant feathered halo. The dress also boasts daggers piercing a heart over her chest. Met Gala regular Blake Lively was back to being her most high-fashion princess-y self at the 2018 gala. The Gossip Girl alum wore a long ruby dress and worked it in front of the cameras. She swapped her husband Ryan Reynolds with Christian Louboutin as her date for the event.

Oh hey T’Challa. For once, a man did not disappoint. Chadwick Boseman stepped up the game for all men attending the 2018 Met Gala with a jaw-dropping, highly embellished ivory cape. He finished look with glistening gold shoes. Wearing Chrome Hearts, said the best part of her night was seeing Anna Wintour: “I always get really, really star-struck when I see her.” Her black headpiece was attached to her floor-length veil and train. “It’s sewn into my head,” she said. “The things we do, darling.” Confessions of a fashion model. Cara Delevingne shields her face with a beaded veil and dons a VERY revealing lattice dress as she slays the red carpet. Zendaya is giving us modern-day Joan of Arc vibes in a silver chainmail Versace gown with armor-like detailing. She’s also showing off a new hair look: a blunt reddish-brown bob. It’s Ariana Grande’s very first Met Gala, and she did not hold back. Ariana Grande wore a literal work of art by Vera Wang, looking like she stepped straight out of a painting. There’s no questioning whether or not she nailed the theme.

Solange Knowles was late to the red carpet, but who cares? Ever the visionary, her dress by Iris van Herpen was an inorganic black material that was maybe rubber or maybe latex, and definitely unconventional. On her head, a black do-rag and a gold halo. In her hand, a bottle of Florida Water in a black macramé-like carrier. The X-men starlet was one of the first stars to hit the red carpet in gold, choosing a glistening, chainmail dress by H&M as she walked the red carpet. The custom gown featured sultry details, including a plunging neckline, open sides and a thigh-high slit.]

Is this Emilia or Queen Daenerys Targaryen? The 31-year-old Game of Thrones actress showed up on the 2018 Met Gala red carpet in a show-stopping Dolce & Gabbana Alta Moda gown.

The 23-year-old model attended the fashion event in a blue and tan gown that was seemingly inspired by the stained glass windows found inside churches to go with the night’s theme, Heavenly Bodies: Fashion and the Catholic Imagination. Her blonde hair matched the top half of the dress and she fastened her locks behind her ears using gold bobby pins.