The Greatest Social Media Moments That Made Headlines In 2017 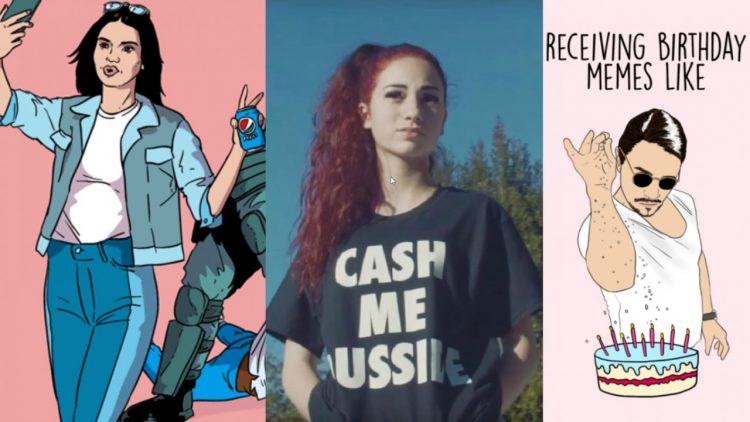 Narrowing down the vast universe of social media to its subjectively best moments throughout an entire year is an overwhelming task — let’s start there. However, some choices are more obvious than others. For example, Beyoncé’s world-stopping announcement that she was pregnant with twins? Undoubtedly on the list. Selena Gomez revealing that she had undergone life-saving kidney transplant surgery? Same thing.

So, with all of that in mind, here are 11 of the best viral moments social media had to offer in 2017: It is worth noting that Biebs and SelGomz still have not been officially reunited as boyfriend and girlfriend, but they have been seeing pastor Carl Lentz for guidance on their relationship to avoid repeating the same problems they encountered in the past. Now, Justin had developed a deep and mature relationship with Jesus Christ, so hopefully it’s all good as the pair just love and “want the best for each other.”

One word: Cringe. Have you ever felt so vain that you think your good looks could literally stop war? Well, that’s what happened to the once untouchable Kendall Jenner who had a pretty perfect life, before it got ruined by a bad PR move and badly-planned marketing strategy.

The infamous Kendall Jenner x Pepsi ad was a blowout of youth and race exploitation gone wrong. Die-hard fans quickly turned on her. As a result, the model lost a small but significant number of deals with some major international brands.

We have been locked indoors with no air NO FOOD and NO water #fyrefestival #fyrefest fyrefraud pic.twitter.com/wg5pZmSvnx

Early report is that many of the tents aren't assembled. Here's their tropical private island owned by Escobar! #FyreFestival pic.twitter.com/TNzBDbNAUJ

The ultimate 2017 parable – a failed music festival in the Bahamas that became the talk of the internet in April. It was the perfect storm: “influencers” such as Bella Hadid and Emily Ratajkowski were paid a lot to promote the event on their Instagram accounts, rapper Ja Rule was one of the organisers, and acts such as Blink-182 and rap trio Migos were due to headline. But when guests arrived at the site, it didn’t look like anything they had signed up for. The private jet promised to festival-goers was just a plane from Swift Air. There were a bunch of trucks, people unloading things, tents everywhere, stage equipments were being moved around with forklifts and sound of somebody’s iPod Shuffle plugged into the main stage. Guests paid around $4,000 – $25,000 to attend the fraudulent event. Spectacularly, the refund form offered the option of forgoing your refund for double the tickets to next year’s festival. Obviously, it’s a no from most of them. We’ve all probably felt like starting completely over on social media, probably by deleting photos that we don’t want to be associated with anymore. And since stars are just like us, Taylor Swift actually did it: On 21st Aug, TayTay posted a mysterious, foreboding .gif of a snake to Twitter and Instagram. Every other post to ever exist from her feed was gone. All that remained was the snake, and the snake whisperer herself.

Who can figure out the true meaning of "covfefe" ??? Enjoy!

Back in March, Donald Trump introduced the world to “covfefe” – a new word that nobody has heard of before. Almost immediately, #covfefe began to trend worldwide on Twitter, as followers wondered how they could learn more, what is the correct pronunciation, and if this, after all, is the moment of truth about the US President’s level of literacy. One user pointed out that Trump was probably trying to write the word “coverage”, since it feature the same first three letters and fit neatly into the phrase “negative press coverage”.

I’m very aware some of my fans had noticed I was laying low for part of the summer and questioning why I wasn’t promoting my new music, which I was extremely proud of. So I found out I needed to get a kidney transplant due to my Lupus and was recovering. It was what I needed to do for my overall health. I honestly look forward to sharing with you, soon my journey through these past several months as I have always wanted to do with you. Until then I want to publicly thank my family and incredible team of doctors for everything they have done for me prior to and post-surgery. And finally, there aren’t words to describe how I can possibly thank my beautiful friend Francia Raisa. She gave me the ultimate gift and sacrifice by donating her kidney to me. I am incredibly blessed. I love you so much sis. Lupus continues to be very misunderstood but progress is being made. For more information regarding Lupus please go to the Lupus Research Alliance website: www.lupusresearch.org/ -by grace through faith

On 14th Sept, Selena Gomez finally told everyone that she had undergone a kidney transplant surgery over the summer, after suffering from life-threatening complications due to autoimmune disease Lupus, which she was diagnosed with five years ago. Selena received her kidney donation from her best friend, actress Francia Raisa.

Presenting the most liked Instagram post of 2017 which has 11.2 million views: it’s by Yoncé! On 1st Feb, the star posted a photo of her face veiled, cradling her stomach, kneeling before an extravagant floral display. She was expecting twins Rumi and Sir Carter. This photo has prompted fans (as well as non-fans) to copy her style and post a similar image on their social media channels too. It was a fun month.. until it got too much. 😅

On May, Bow Wow (aka Shad Moss) has been caught pretending to be cooler than he is, just like the rest of us sad socks. Before boarding his commercial flight, Bow Wow had tweeted a photo of a private jet insinuating that he would be flying in style to New York City (refer to the first tweet). When he was spotted in the commoners’ flight, lots of people recreated false bragging at his expense including Chance the Rapper, 50 Cent and more non-musicians. The #BowWowChallenge is a hilarious reminder that everyone lies on social media.

When this image first popped up on Instagram, everyone immediately went wild and started speculating about the pair’s relationship. After months of dating rumours, Jennifer Lopez finally sets the record straight by responding, “Let me clear this up. I am not with Drake.”

During one of her “All I Have” residency shows in Las Vegas, Drake’s song “Hotline Bling” began playing — she paused, looked at the audience and quipped, “Huh, bootycall,” before giving a dramatic hair flip and heading into her next song. Ooh. What’s more, a source revealed that Drake was still trying to win back his ex Rihanna while dating Jlo, which may have prompted their split.

If you don’t know the name Danielle Bregoli — or the name Bhad Bhabie, for that matter — you’ll know it now. Better known as the Cash Me Outside girl, 13-year-old Danielle literally threatened to have a physical encounter with her mom on The Dr. Phil Show. It was a controversial time: nobody liked her but her skit was too funny that she became a meme and gained instant popularity overnight. Repped by Atlantic Records, Danielle is now a millionaire who has released five hip hop songs (and probably more to come). Who could let 2017 go by without giving one last standing ovation to Nusret Gökçe, the salt-sprinkling Turkish chef who captured all our hearts with his IDGAF sass.