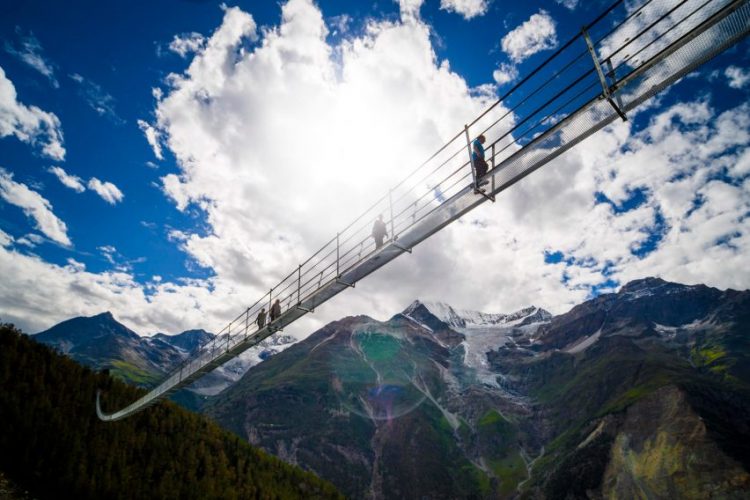 Cutting three to four hours off a two-day hike between the towns Zermatt and Grächen, Switzerland breaks the record for building the world’s longest pedestrian suspension bridge. The Charles Kuonen Suspension Bridge that opened earlier in July 2017 trails between 1,600 meters and 2,200 meters above sea level, with a remarkable span of 1621 ft and a height of 279 ft.

Now a part of the scenic two-day Europaweg hike in the Alps, hikers on trail can witness an all-embracing panoramic view of Weisshorn, the Bernese Alps and the iconic Swiss peak – Matterhorn, making it well worth the climb.

Sparing a three-hour or more detour for hikers, the now 10-minute journey across the Charles Kuonen Suspension Bridge shockingly took only 10 weeks to complete. A rapid construction aside, the bridge’s safety is assured with 8 tonnes of cables employed and a system that prevents it from swinging.

Being anchored deeply into the rock face, the pedestrian bridge prevents previous damage of falling rocks caused to the older bridge that was closed in 2010 from happening.

Besides that, some of the world’s most impressive sky-walks include Russia’s 439 metre-long “footbridge in the sky” and California’s sky slide that was build on the side of the 73-storey US Bank Tower. Worth the visit is also Dubai’s upcoming glass-floored walkway on the 80th floor of the tallest skyscraper in the city’s new Akyon City development.

Measuring only 65cm in width, the  Charles Kuonen Suspension Bridge is a challenge for the faint-hearted as hikers are bound to cross the bridge one after another.