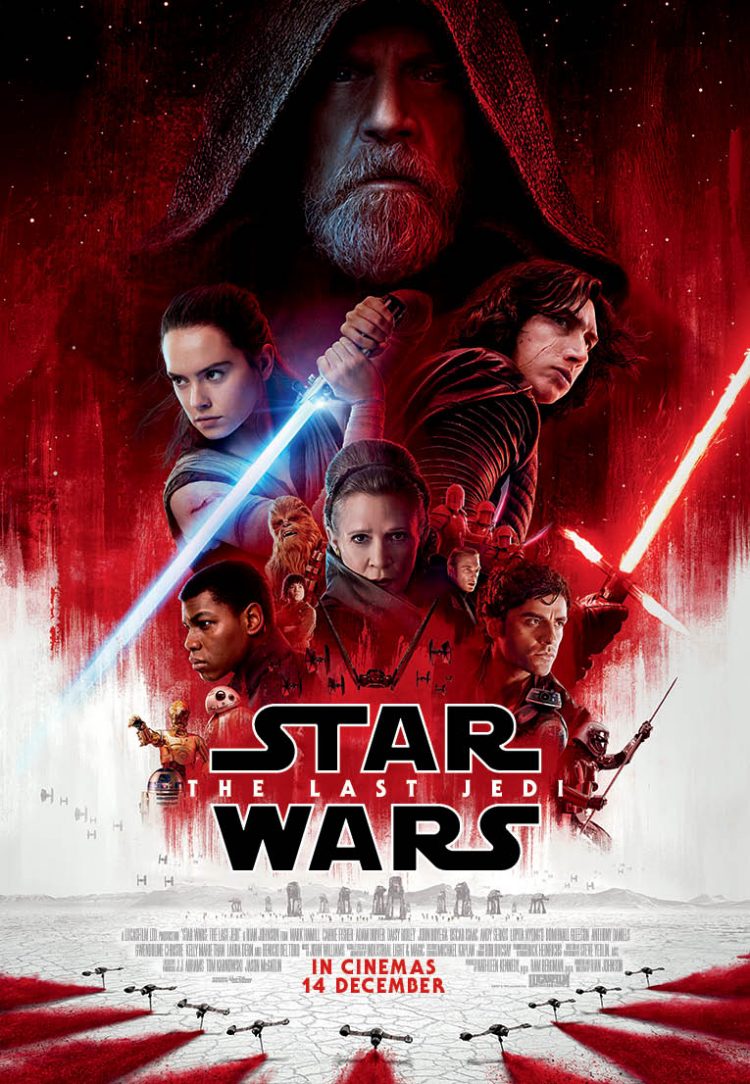 Star Wars: The Last Jedi opens in cinemas today, and I sure hope you’ve got your tickets booked because it is EPIC. *Spoilers ahead. In Rian Johnson’s Star Wars: The Last Jedi pretty much picks up more or less where The Force Awakens left off – the First Order is ready to strike against the Resistance for destroying the Starkiller Base. General Leia Organa (played by the late Carrie Fisher); Poe Dameron (Oscar Isaac) goes a bit rogue to accomplish his mission; Finn is healing from wounds by Kylo Ren (Adam Driver); Rey now knows that the Force is within her after finding Luke Skywalker (Mark Hamill) to hand him his lightsaber.

The Last Jedi follows the Resistance as they struggle to survive against the First Order’s new ability to track them through hyperspace jumps. This in turn sends Finn (John Boyega) and Rose (Kelly Marie Tran) to a planet where they search for someone who can help them. On the other hand, Rey and Kylo Ren (a.k.a. Ben Solo, a.k.a. Leia Organa’s son and Luke Skywalker’s nephew) seem to have a psychic connection with each other, which suggests a relation to both these characters.

Star Wars: The Last Jedi is refreshingly unpredictable, making it palatable for those who don’t really follow the Star Wars franchise. In my opinion, Rian Johnson’s managed to take that almost impenetrable DNA of the Star Wars franchise, and made it into something for not just the fans – he’s made it into something everyone would love and made sure everything was pieced together beautifully amid the thrilling chases, explosions and lightsaber battles.

2015’s The Force Awakens did its job of introducing the new characters, which gave 2017’s The Last Jedi the perfect setting to give the audience time exploring the relationship between these characters. Johnson takes that, and makes sure his audience feel for these characters by injecting humanity and humour (when appropriate) into their interactions and shedding light on their personas. We also get to see the late Carrie Fisher stunningly reprise her role as General Leia Organa, which I found myself moved by.

The Last Jedi maybe the franchise’s funniest film yet. I’m not sure if the funny bits would sit well with hardcore Star Wars fans, but it did make it easier to enjoy the film without having to watch every single prequel. Also, shout out to the Porgs – adorable penguin/owl/duck looking things that warmed up the pretty serious plot.

If I’m being completely honest, I didn’t grow up with Star Wars. Maybe it was my lack of enthusiasm for sci-fi (then), but as I grew older and introduced myself to the films, I’ve taken a liking to the franchise – just not in the “it’s changed my life and I have now seen the light” kind of way. But as I walked out of The Last Jedi, I felt… whole.

The Last Jedi did its job of telling the same essential Star Wars story, just not in the same overwhelming format that everyone’s grown accustomed to for the past four decades. The time has come to look forward, and Rian Johnson’s made sure that The Last Jedi will be there to keep that Star Wars flame going by passing the torch on to a new generation of Star Wars fans.

Star Wars: The Last Jedi is in cinemas now.