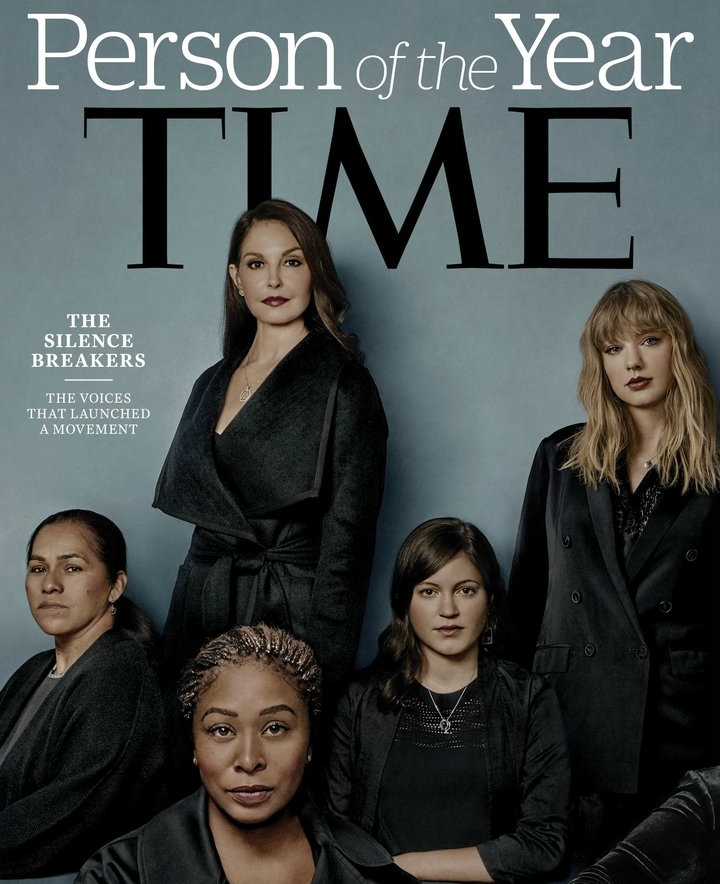 TIME‘s cover has always been controversially discussed, but there’s one thing for sure — it is not a popularity contest. This year, the “Silence Breakers” have been named as Time “Person Of The Year”, and never have the victors felt more just.

Paying tribute to the voices that launched a ground-breaking movement, the cover features five prominent figures but carries the stories of women and men from over 85 countries who stood up and said: #MeToo. The article includes actress Ashley Judd, who was at the centre of the Harvey Weinstein sexual assault allegations, pop star Taylor Swift who won $1 from a sexual assault case against a radio DJ, as well as Rose McGowan, Alyssa Milano and activist Tarana Burke — pioneers in the #MeToo movement that sparked a global discussion about sexual harassment and assault.

“This is the fastest moving social change we’ve seen in decades, and it began with individual acts of courage by hundreds of women — and some men, too — who came forward to tell their own stories,” said the mag’s editor-in-chief Edward Felsenthal.

#MeToo creator Tarana Burke on the power of the movement #TIMEPOY pic.twitter.com/23YIg8Kd25

As Time note in their feature on the cover, “It turns out that—in the most painful and personal ways—movie stars are more like you and me than we ever knew.”

The stories trickled down until it was clearly not just a problem in Hollywood or a problem in politics or a problem in fashion. It is a problem everywhere. It is your friend quietly telling you about a boss who kept rubbing her shoulders or your sister recalling being grabbed on the bus, or you, realising that so many women have been internalising the feeling of being under siege their whole lives.

As worthy as those choices were, the “Silence Breakers” appearing on the most iconic print cover in the world feels even more seismic — although I am quite disappointed that Rose McGowan is not on the cover. She should’ve been front and centre. P/S: Where’s Kesha?

In fact, a number of Twitter users are also not happy with the selection of certain personas gracing the cover, especially Ashley Judd who initially defended Harvey Weinstein, as well as queen of slay, Taylor Swift. 🐍

Taylor Swift tried to trademark the phrase "this sick beat." Did everyone forget that? She wants to own other people's culture, words, phrases, and expression. Is this your white feminist savior? ok…

Taylor Swift included on the cover of Time as a “Silence Breaker” is sickening. She is the most opportunistic feminist there is, so many other brave women to have praised other than her.

LET ME GET THIS STRAIGHT:

Harvey Weinstein was at Women's March – where Ashley Judd called out Trump, not mentioning Weinstein – organized by Linda Sarsour, an anti-Semite connected to the Muslim Brotherhood, who worked with Rasmea Odeh, a convicted terrorist.#WednesdayWisdom

"The Silence Breakers"
How is Ashley Judd on this list when she knew that #HarveyWeinstein was sexually abusing women for decades, yet she chose to protect him?

With that said, for the rest of us, our job now is to support this momentum however we can — for our powerless friends, innocent young girls and boys, mothers everywhere.. and for ourselves.

Note: If you have encountered any type sexual harassments, feel free to share your #MeToo stories at [email protected]