Barbie Reveals Its First-Ever Hijab-Wearing Doll & She Is Stunning 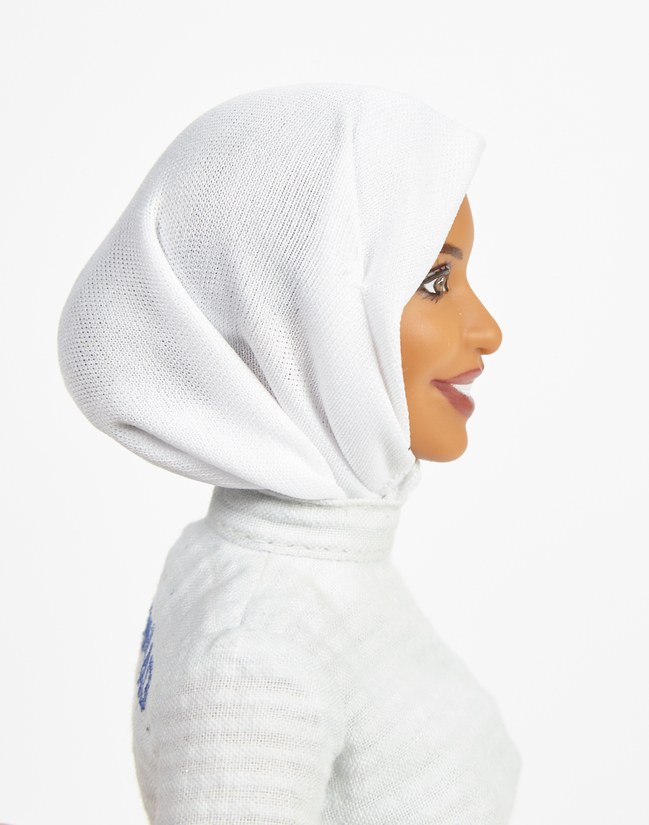 Photo: Mattel (via: The New Yorker)

The new doll is the latest addition to the brand’s annual Shero program, which honors admirable women and their achievements. Last year, Ashley Graham was Shero’s honoree of the year and received the first-ever body positive Barbie. This year’s honoree? Ibtihaj Muhammad – the first Muslim American woman to compete in the Olympics while wearing a hijab.

We are so excited to honor @IbtihajMuhammad with a one-of-a-kind #Barbie doll! Ibtihaj continues to inspire women and girls everywhere to break boundaries. 🤺 #Shero #YouCanBeAnything #GlamourWOTY

“Barbie is celebrating Ibtihaj not only for her accolades as an Olympian, but for embracing what makes her stand out,” Sejal Shah Miller, Barbie’s vice-president of marketing, said in a statement. “Ibtihaj is an inspiration to countless girls who never saw themselves represented. By honoring her story, we hope this doll reminds them that they can be and do anything.”

Ibtihaj unveiled her Barbie during Glamour’s Woman of the Year summit in New York. This is the latest of Barbie’s boundary-breaking dolls in an effort to become more inclusive in recent years. Muhammad’s doll will be available for purchase in 2018. The Olympic fencer, 31, posted about the news on Instagram as well.

“I think its revolutionary for Barbie to take a stand in this moment that we’re in – and I would say, as a country, to have a doll wear a hijab and be the first of its kind,” Muhammad said to People.

Thank you @Mattel for announcing me as the newest member of the @Barbie Shero family! The Barbie Shero Program recognizes women who break boundaries to inspire the next generation of girls and I am so excited to join this incredible group of women. I’m proud to know that little girls everywhere can now play with a Barbie who chooses to wear hijab! This is a childhood dream come true 😭💘 #shero #ibtihajbarbie

“There has never been a Barbie doll to wear a hijab before. I’m really excited to have this moment happen in my life and also for all these little girls now who can shop for Barbie doll that may look them, may wear a hijab like they do, or like their mom does, or like a friend does. But also have kids who aren’t Muslim, who don’t wear a hijab, to also have the opportunity to play with a doll that wears a hijab,” she continued.

Prior to Barbie’s first-ever hijab-wearing doll, the option of dressing Barbies in hijabs were almost impossible. The company Hello Hijab gained attention for making doll-sized hijabs to get children “accustomed to seeing headscarves in order to help fight stigma.”

The Barbie designed after Ibtihaj Muhammad will be available for purchase in 2018. With Ibtihaj’s Barbie, we’re overjoyed that play time will be a lot more inclusive for the kids – and the rest of us Barbie freaks.