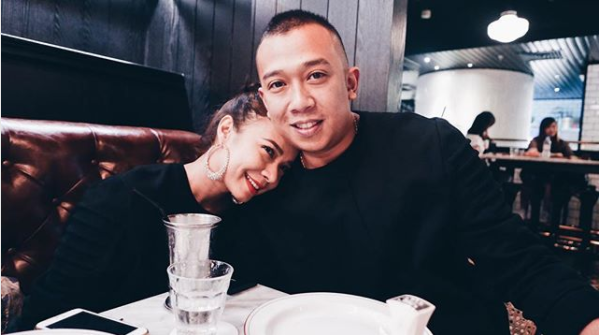 The Internet has been wild with speculations over Nora Danish’s subtle baby bump, after seeing Nora in a loose fitting outfit at best friend Laudya Cynthia Bella and Engku Emran’s wedding on social media. The picture showed Nora wearing a loose fitting powder blue dress with Nedim dressed in a powder-blue baju melayu set. The actress finally confirms that she is pregnant in a statement with BH Online released earlier today.

“Me and my husband were overjoyed when we found out. I’m also taking precautions as advised by my doctor as the pregnancy is still in its early stages.” said the 35-year-old actress in a statement. The actress’ pregnancy comes after 5 months of being married to hubs Nedim Nazri.

This actress also mentioned that she will be putting her career on hold for a little while. “At my age, anything may happen so I’ve got to be more careful. I will also be taking it slow with my career, as advised by my doctor and husband.”

“For now, I’m just focusing on keeping a healthy pregnancy.” she said to BH Online.

Nora and Nedim tied the knot in an intimate ceremony with their closest family and friends at Glasshouse Seputeh on March 30th of this year. Their young sons from previous marriages – 8-year-old Putra Rayqal and 6-year-old Mohamed Nedrin – stole the show at the wedding as their ring-bearer. We can’t be happier that the boys are finally going to get another sibling soon!

2 months ago I received this from my beautiful wife & on that day I knew how wonderful my future would be ❤ . I feel so fortunate to have you as my friend, my wife, and soon, the mother of our child. . And I don’t have the slightest doubt in my mind that you’re going be as amazing at motherhood as you are at everything else you do. You are an exceptional wife on every level and I can only count my blessings and be grateful that I have you by my side through eternity InsyaAllah. I love you Sayang ❤ #thankYouALLAH #NeNojr #daddyCantWaitSeeYou #3month #1stTrimesterisOVER