Just when we thought that Apple’s reigning days are over, the tech giant once again blew our minds (or eyes) away with its latest generation of smartphone installment, mysteriously titled the iPhone X.

In commemoration with the 10th anniversary of Apple’s smartphone, the £1,000+ (RM5593) iPhone X (or 10 in roman numeric system) features a radical redesign and new technology including all-glass, edge-to-edge display and no home button. The phone has a 5.8-inch OLED screen, which fills the entire front of the device. Apple has removed the iconic home button to make way for the display, replacing it with facial recognition software called Face ID — which is used to unlock the phone, authenticate Apple Pay and customise the new animojis. It also features wireless charging. However, we must note that these innovative technologies are not that new, as the features are very similar to Samsung’s Galaxy S8. Looks like Apple is finally catching up with its Android brothers. The brand says: “Our vision has always been to create an iPhone that is entirely screen. One so immersive the device itself disappears into the experience. And so intelligent it can respond to a tap, your voice, and even a glance. With iPhone X, that vision is now a reality. Say hello to the future.” On top of that, Tim Cook also launched the iPhone 8 and iPhone 8 Plus, two new phones that have 4.7-inch and 5.5-inch screens. Like the iPhone X, the devices also have an all-glass design and can be charged wirelessly.

In addition to the phones, Apple announced a third generation of its Watch and a 4K Apple TV.

Here's a look at the new Apple TV 4K and its redesigned Siri Remote. pic.twitter.com/Clh12efNBE

For more information on the new devices, visit Apple. 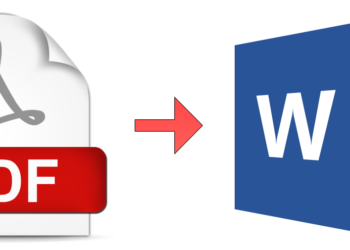 This Trick Can Made Any PDF Turn Into An Editable Word Document, Without Any Software!

When someone sends you a document in PDF format to edit or fill in, nervousness kicks in immediately because there...