Review: IT Is Here To Ruin Sleep For Everyone 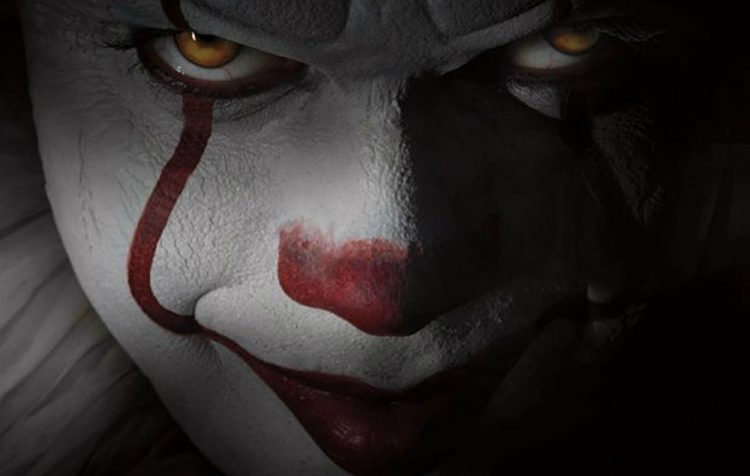 A couple of nights ago, I attended a screening of It thinking “How bad can it be? It’s just Bill Skarsgård dressed as a clown.” In my experience, VERY EXTREMELY BAD BECAUSE THIS WAS NOT THE BILL WE GOT:

Now he looks like a demonic clown who’s main mission every 27 years is to kill kids and have you cursing the day Stephen King went “You know what would be a great idea? An infantile killer dancing clown who shape-shifts into your worst imaginable nightmares and then feeds off your fears and maybe a limb or two.”

Before I get into It, I just want you to know that the read ahead is full of spoilers and lots of emotional WTFs – thanks to director Andrés Muschietti’s and Bill Skarsgård’s take on Pennywise the Dancing Clown.

Set in the ’80s, It tells the story of “The Losers’ Club,” seven children whose seemingly idyllic summer vacation in 1989 is bogged down by the disappearance of children in the small town of Derry, Maine. And even though everyone is completely and 100% WELL AWARE that children are going missing, nobody’s talking about it and everyone moves on with life because *shrugs*.

That is until this kid with a stammer called Bill (Jaeden Lieberher) has to look after his little brother Georgie (Jackson Robert Scott) and let him to play outside in the rain alone, sailing a paper boat down a rushing gutter where this totally creepy but seemingly friendly clown asks him if he’d like his boat back – which led to him losing an arm and disappearing into the gutter completely and led us to losing our minds. SUCH VIOLENCE, MUCH WORRY.

Georgie winds up as a statistic, in a town notorious for kids going missing and cops not being about to do much of anything. Bill heads off for the summer with his bunch of friends who are outsiders/losers/oppressed by other psychotic town bullies.

Beverly (Sophia Lillis) is being abused by her dad, Ben (Jeremy Ray Taylor) is a shy, overweight kid with a crush on Beverly and an interest in local history that eventually opens everyone’s eyes to what’s going on. Mike (Chosen Jacobs) feels he can’t take the brutality of working in the family meat-packing business; Eddie (Jack Dylan Grazer) who’s now a hypochondriac, thanks to an overprotective mother; Stan (Wyatt Oleff) who’s scared of letting his dad down by messing up his upcoming bar mitzvah and Richie (Finn Wolfhard) the funny kid with one too many d*ck jokes.

It could have been a classic coming-of-age tale, were it not for the fact that everyone’s in fear of a satanic clown who shape-shifts into whatever the hell you’re scared of and imprisons you forever in his horrendous lair within the sewage system. The group of kids hang out together all summer, dealing with their loneliness, their feelings of love and yearning – until they start seeing a terrifying clown stalking them and begin to plot their attack because, well, none of the adults in town seem to be giving a crap/ Pennywise put a spell on adults so they’d be blind to the monstrosity. WTF, right?

Here’s the thing about It – it IS scary. There’s something surreal about the way the film normalised non-supernatural violence in the form of bullying, violence and abuse and then serves you with hot load of Pennywise the Dancing Clown and his gleaming evil stares. He also has a tendency to creep up on people and jump out of nowhere a hell of a lot, which was bad for someone who already hates clowns AF (me).

Besides the fact that Muschietti had successfully bring all those things you’d find scary as a kid to on-screen reality (like the part where poor Stanley gets chased around by a woman in a painting in his dad’s library that he’s freaked out by – I’ve had a nightmare similar to this, no joke), I also can’t shake the fact that we’ve been here before – scary old houses, scary people, scary bathroom sinks and scary clowns. But that’s not to say that these elements weren’t at all scary.

There are individual horror scenarios that each of the kids must face before coming together as a group (which would definitely keep you on edge). Each set of fear is different enough than the last to be scary, and every character gets to scream in terror at least once. But It is a movie about the power of friendship conquering individual fears, and it did feel like Muschietti wasted a little too much time on the unique fear of every character – time of which could’ve been spent on building up the main story at play.

The filmmakers up the ante during the climax, making Pennywise (a.k.a. Bill Skarsgård) one of the most visually extra and horrifying horror villains ever. Bill contorts and giggles and creeps on you and thanks to super high-tech SFX chops, he defies the laws of physics and appears as something so unnatural that you’d go “WTF AM I WATCHING? WTF IS THIS?!” at some bits.

Which is why the members of The Losers Club kept what they’ve seen to themselves at first until they’re surrounded by blood that only they can see (damn clown put a spell on adults, remember?) – Muschietti’s way of laying the groundwork for a terrifying conclusion that all of his characters are on the same, horrifying page.

With all that’s been said, I have to admit that It tugged at my heart strings for its portrayal of simpler times and 1980s nostalgia with New Kids On The Block and Lethal Weapon 2 references making its way on film  in 2017. It’s definitely not a coincidence that the new ’80s nostalgia Muschietti opted for was presented in the same sentimentality that Stephen King had for the ’50s in his original version of IT – which is why we reckon that he loved the 2017 remake.

Muschietti also ensures that everyone’s forced into a child’s naive and innocent mentality and then scars us forever because there’s really no point in remaking a movie that was the stuff of every ’80s kids nightmares 27 years later (intentionally, because Pennywise comes out to feed every 27 years) if he’s not scaring the living hell of his audience. And let us all just agree that everything is horrifying when there’s a scary clown involved.

It is rated P18 and drops in cinemas today.