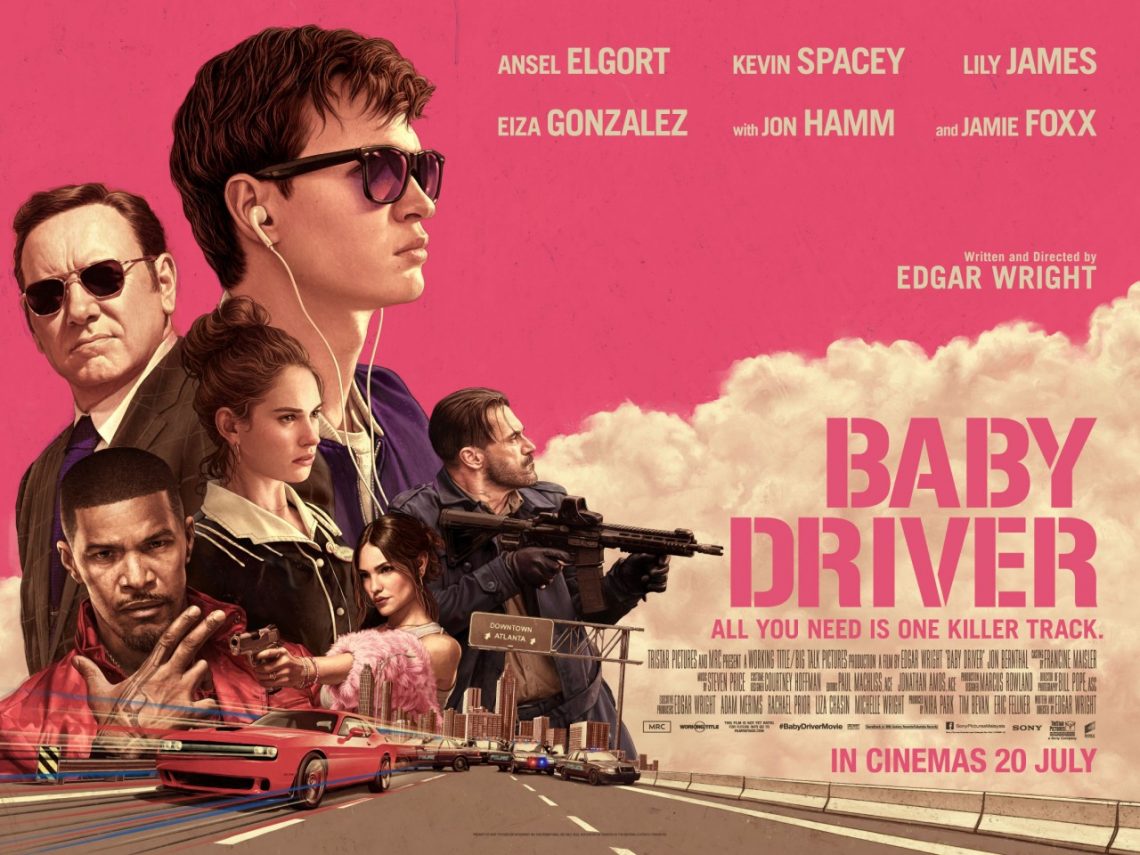 “He’s a good kid, and a devil behind the wheel.”

Arguably one of the most highly anticipated films for 2017, Baby Driver is an action thriller motion picture that is both directed and written by renowned British director Edgar Wright, the one and only behind remarkable works of art such as Shaun of the Dead (2004), Hot Fuzz (2007), Scott Pilgrim vs. The World (2010) and Ant-Man (2015).

Starring Ansel Elgort, Jon Hamm, Jamie Foxx, Lily James, Jon Bernthal, Kevin Spacey and more, Baby Driver details a story about a young getaway driver (Elgort) who relies on the beat of his music to overcome tinnitus (constant buzzing, ringing or whistling) in his ears he suffers after a childhood accident.

When he meets the ideal woman of his dreams Debora (James), Baby ceases the opportunity to ditch his criminal life behind and make a clean getaway to finally live free. That said, he must face the music when a doomed heist threatens his life and love after being coerced into working for a huge crime boss (Spacey).

Fuelled by a killer soundtrack and high-octane crime-and-chase maneuvers, Baby Driver is set to rev up your adrenaline with a mixture of mph and music. The question is.. Will Baby Driver live up to the sensation of Wright’s British films? We’ll just have to wait to find out. In the meantime, here are 15 highly intriguing facts about the movie you should know! ONE// It was important to Wright to ensure that the beats of the car chases and action scenes were in lockstep with those of the soundtrack. To do that, they had to tediously be at the locations to measure the roads out before actually driving the car and timing everything. They choreographed everything to music, instead of the other way round.

TWO// A majority of the on-the-road action in Baby Driver are carried out by the actors themselves and stunt drivers who perfected the real tricky stuff without the aid of green screen manipulation and visual effects. Due to this, there wasn’t a lot of room for error.

THREE// The only cast remained from the first table reading of the script in 2012 is Jon Hamm. As for Baby’s love interest Debora, Emma Stone was originally supposed to play the character but turned down the opportunity to star in La La Land. Chloe Grace Moretz was also in the running, but then dropped out to film The Little Mermaid.

FOUR// Wright cast Ansel Elgort to play Baby, the main character in Baby Driver, because of his passion for musicality. Elgort, aged 22 at the time of shooting, writes music, plays instruments, can DJ and even dance. Naturally, he is a quintessential fit for a character who holds music as a huge part of his life.

FIVE// Every character in the film has a designated colour for their wardrobe. Baby’s costume is meant to be more classic, hence he is always dressed in black and white as a reflection of how he views the world. One white shirt he wears in the film also transitions darker in four stages to grey to symbolise his escalating involvement in the dark world of crime.

SIX// Wright worked hard to authenticate Baby Driver and make his story more legit by interviewing ex-cons about their criminal histories so he could verify the scenarios he thought up. As a result, many of the scenes are based on real anecdotes by real ex-cons.

SEVEN// As a British director, Wright wanted to make sure that his script wasn’t too British and to make Baby Driver more of an American crime film, he consulted Joe Loya, an ex-con who wrote the book The Man Who Outgrew His Prison Cell about his time behind bars.

EIGHT// The stunt supervisors all agreed that the gun fights in Baby Driver were the hardest to film as every gun shot had to be perfectly timed to the music playing for that scene. No one could mess it up as every step had to be in time, every line had to be the same and every movement had to be faultless.

NINE// The idea of Baby Driver came about in 1994 when Wright was editing his 1995 debut movie A Fistful of Fingers, which was also his first solo script. At the time, he was obsessed with Spencer Blue Explosion’s “Bellbottoms” (the song that is playing during the first heist in Baby Driver) then began to imagine a car chase and bank robbery set to that song.

TEN// The production of the film utilised 150 cars. There weren’t 150 models, but variations of one model were required with different modifications for the purpose of the stunts. One of the cars, a 2014 Mercedes, had too many safety features which made the stunts impossible. The crew even rang Mercedes to overwrite the settings but to no avail.

ELEVEN// Baby Driver was initially set in L.A. but the locations were infeasible for production. Wright then looked into other locations including Detroit, New Orleans, Atlanta and Cleveland. When he settled on Atlanta, he rewrote the script for that city. It also seemed fitting because of the city’s vibrant music scene.

TWELVE// Music is a huge part of Baby Driver, but that doesn’t make it a musical. The music is always sourced, either from the iPod, the radio and so on. Speaking of music, the track list barely changed and has remained the same even before filming. All the tunes were cleared for release even before filming began.

THIRTEEN// Wright shot the beginning of Baby Driver way ahead when he directed the music video for British techno duo Mint Royale’s “Blue Song” in 2012 which featured comedian Noel Fielding playing a getaway driver. Even J.J. Abrams thought it was a great idea for a movie at that time.

FOURTEEN// Some of the movies Wright took inspiration from for Baby Driver included Heat, Point Break, The Driver, Blues Brothers, Straight Time, Bullitt, The Warriors and even the Mad Max franchise. Wright adored how George Miller did Fury Road and credited it to his detailed planning.

FIFTEEN// Flea, or Michael Peter Balzary, from the Red Hot Chilli Peppers appears in Baby Driver and over the production time, both Jamie Foxx and Ansel Elgort grew very close to the musician. They would hang out after at Flea’s studio, and are apparently making a record together.

Catch Baby Driver in Malaysian cinemas on July 20th! In the meantime, watch the trailer below: