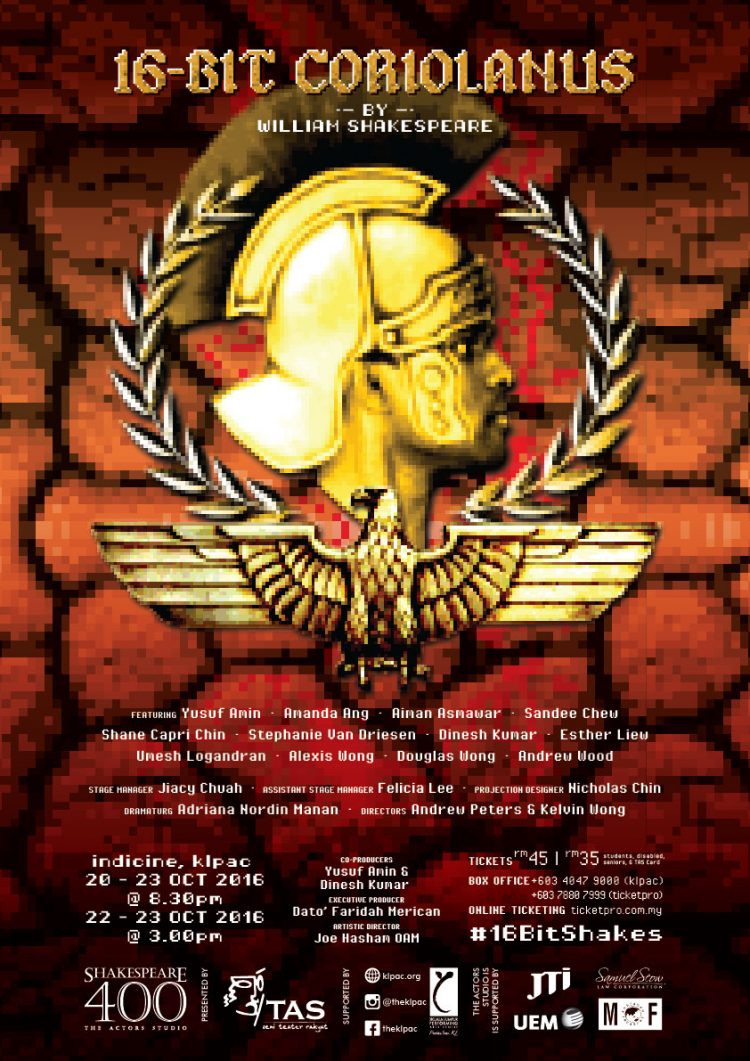 The Actors Studio Seni Teater Rakyat continues to commemorate 400 years since the death of William Shakespeare with a contemporary take on Coriolanus – Shakespeare’s most political play albeit being lesser known and produced.

Set in post-war Rome, 16-bit Coriolanus depicts the story of Roman General Caius Marcius, who earns the title “Coriolanus” for saving his city from foreign intruders. As the new Consul, he makes clear his defiance for modern democracy as it is an easily-manipulated system. Public unrest and betrayals within the Senate then caused him to be sent into exile. In the meantime, Coriolanus seeks help from the intruders for a showdown Rome will never forget.

Several critical questions raised from the play include: How should democracy function? How and why does manipulation happen in the first place? What happens when the voice of the majority falls prey to this manipulation? Is there a better political system for us in the 21st century?

An eclectic ensemble of 12 cast will take on more than 30 roles in less than 90 minutes for 16-bit Coriolanus, which is presented from the nostalgic lens of 90s video games where audiences can witness familiar tropes in an animated, fast-paced, high-octane fantasy world. For ease of comprehension, only about a third of the original text is utilised.

Produced by duo Yusuf Amin and Dinesh Kumar, the production involves an international collaboration between two MFA graduates from The Theatre School at DePaul University in Chicago. Maryland native Andrew Peters joins creative forces with local director Kelvin Wong, both complementing one another in aesthetics, ethics and politics.

16-Bit Coriolanus runs from October 20 to 23 2016 at indicine, The Kuala Lumpur Performing Arts Centre with tickets priced at RM45 for adults and RM35 for concessions (students, the disabled, senior citizens and TAS Card members). Seats for each performance are limited.