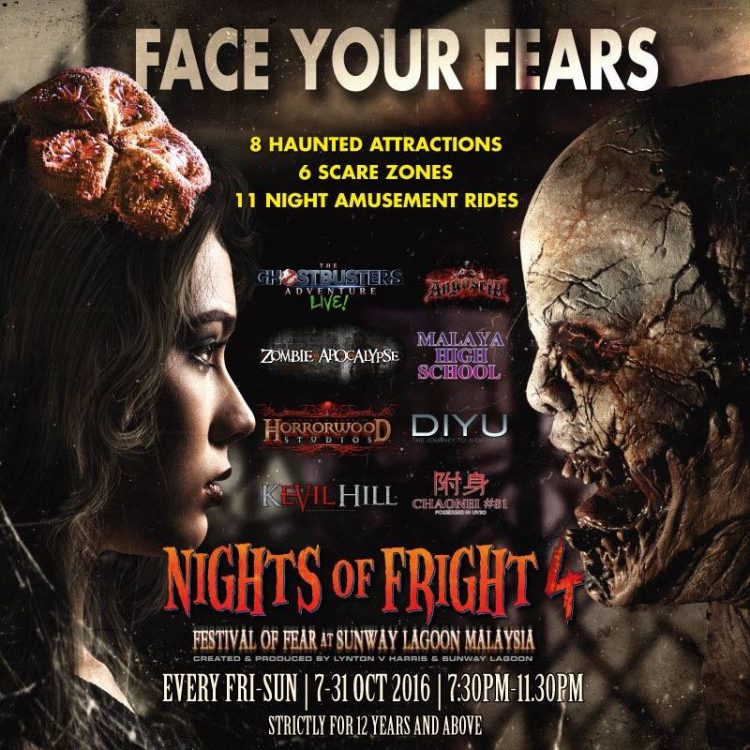 Malaysia’s largest and scariest horror festival is back for the fourth time at Sunway Lagoon and this time, Nights of Fight 4 invites you to come face to face with your fears as the festival plays host to a horde of ghosts, ghouls and sinister creatures lurking throughout the theme park.

Happening from 7th October till 31st October 2016, Nights of Fright 4 will showcase many brand new haunted attractions and scare zones that include Ah Wing’s Butcher Shop, the Ghostbusters Adventure Live!, Horrorwood Studios and more to keep you on your toes. Guests who visit Nights of Fright 4 on the 9th of October 2016 from 8.30pm to 9.30pm are also in for a treat as several popular Malaysian comedians will come together as Kings of Laughter and roam the walkways of Sunway Lagoon as terrifying beings of the night waiting to terrorise everyone.

Nights of Fright 4 happens at 7.30pm to 11.30pm every Friday to Sunday from 7th to 30th October, including 31st October 2016. Tickets are priced at RM58, with exclusive promotions such as RM120 (one Sunway Lagoon admission ticket and one NOF ticket) and Buy 2 for RM80 (entry dates on Sundays only). You could always purchase tickets, BUT why do that when you could win some from us? We’ve got 20 passes to Nights of Fright 4 to be given out, and these passes are valid for the 16th of October 2016 (Sunday)!

Just fill in this form to stand a chance at getting hold of those NOF4 passes:

We will not be accepting submissions after 10pm on October 3rd 2016.

– This event is strictly for those who are 12 years old and above
– Each winner will take home four (4) tickets to Nights of Fright 4, valid on the 16th of October 2016 only
– The winners will be notified directly via email and there may not be a winner announcement
– We will not be posting out the tickets and winners will have to redeem their passes from Sunway Lagoon’s Annual Pass Counter between 9am to 6pm
– We will only allow you to redeem the tickets if you produce an I.C. that matches the one in the submission form