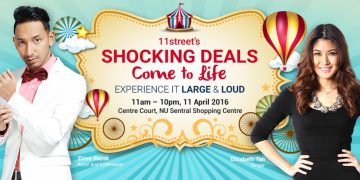 Zizan Razak & Elizabeth Tan Are The New Faces Of 11street!

Zizan Razak & Elizabeth Tan Are The New Faces Of 11street!

Funny man, Zizan Razak and Malaysia’s YouTube sweetheart, Elizabeth Tan are the new Brand Ambassadors for 11street and guess what? You’ll get to meet them at 11street’s 1st anniversary celebration at NU Sentral on 11 April!

Themed 11street’s Shocking Deals Come to Life, the online marketplace invites all Malaysians to join the party – a fun-filled carnival with games, goodies and coupons to be given away.

Details are as follows:

Familiar faces like Intan Ladyana and Atikah Suhaime will also present and during the event, 11street and Xpax’s collaboration will be unveiled. Leading up to the anniversary, 11street is running various onsite promotions from the 1st to 11th April 2016, whereby unlimited discount coupons will be given out to loyal consumers.

11street also takes this opportunity to announce its Fly High LIKE A STAR with 11street contest. Just spend a minimum of RM11 on the 11street mobile app and answering a simple question! Participants will stand a chance to win a breath-taking helicopter ride followed by an intimate dinner session with Zizan and Elizabeth.

For those who are interested, do participate in the contest from 23rd March until 3rd April on 11street.