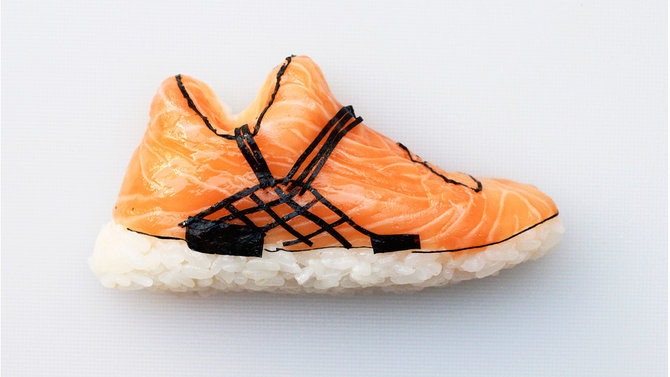 If you’re not a fan of sushi, we’re about to change your mind with these sneakers made entirely from raw fish and rice.

Yujia Hu, AKA @theonigiriart, a chef and artist based in Milan, combined his culinary and artistic talents with his passion for basketball and sneakers to make these incredible and totally edible tiny shoes out of sushi ingredients. Hu shares his creations on Instagram, of which we have since been following Hu’s Instagram page religiously.

Hu is the sushi chef and owner of Sakana Sushi in Milan. Unlike Hu’s Instagram, the restaurant’s menu doesn’t feature Yeezy sides of rice or seaweed Air Jordans, which is understandable considering that it takes about 20-30 minutes to whip up each sushi sneaker.

“I actually went to an art school, but then I interrupted my studies because I had to work for myself and learn how to make sushi from a master sushi chef at only 18 years old,” the now-28-year-old chef tells SELF. “I began creating onigiri art, at first, just for fun, but then I started being very passionate about it and love what I am doing.”

After getting familiar with the art of sushi, Hu decided to incorporate things he loved, like the NBA, sneakers, film, and TV into his creations. “I’ve always been a big fan of NBA, so I started creating onigiris representing my favorite basketball players,” Hu said.

“Aside from that, one of my passions is also cinema and TV series, so other creations were iconic movie and TV series actors.” Sushi versions of actors and athletes featured on Hu’s Instagram include Hugh Jackman, Keanu Reaves, Pharrell Williams, Tyrion Lannister of Game of Thrones, and Michael Jordan.

And yes, Hu’s creations are 100 percent edible. Hu explains that he mostly uses sushi rice, seaweed, fish and sesame seeds to make the treats. He also shared a video of himself dipping a sushi Yeezy sneaker into soy sauce.

I mean, at least he’s not letting these beautiful creations go to waste. Someone’s gotta eat it. We just wish it was us chomping down that Yeezy Boost sushi instead.