Dolce & Gabbana Just Sent Drones Down The Runway, While Gucci Made Replica Heads For MFW 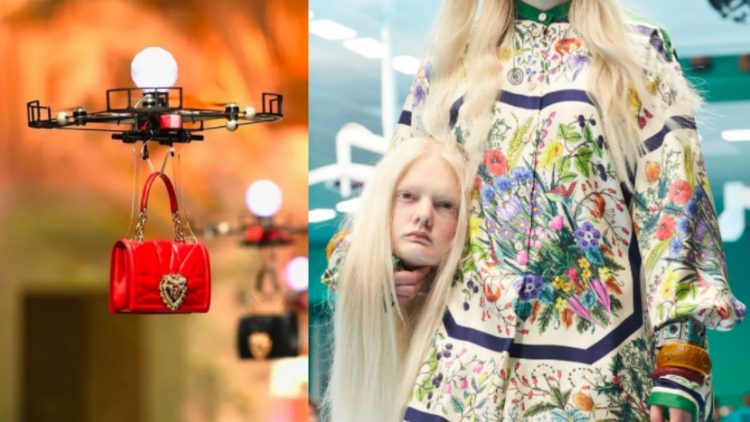 It’s 2018, and as further proof that we’re already living in the future, drones can now be considered as a new fashionable statement. Why, you ask?

In an unexpected news, Italian luxury fashion house Dolce & Gabanna has sent a bunch of flying drones down its runway during the brand’s Fall/Winter fashion show in Milan, Italy last Sunday (25 Feb 2018).

Signs and announcements in several different languages pleaded multiple times for audience members to turn off their personal Wi-Fis and hotspots, which resulted the show to start 45 minutes behind schedule.

Well, asking 600 peeps to cut their connection to the internet was not exactly an easy task. Guests, including Anna Wintour, were irritated for the delay but as soon as those AI babies whizzed the runway — jaws instantly dropped.

Of course, Dolce & Gabbana still has an eye on those millennials. There was plenty of high-flash sportswear, like a fully-sequined jersey, velvet trackpants and a silky bomber jacket with cherub’s wings sprouting from the back showcased during the fashion show.

On another note, veteran designer Giorgio Armani has slammed luxury fashion brand Gucci for going ‘overboard’ with their latest runway collection, which has controversially exhibited models strutting the runway while holding realistic-looking dragons and replicas of their own heads.

Presenting looks from the #GucciFW18 fashion show by #AlessandroMichele. Inspired by ‘Cyborg Manifesto’ by D.J. Haraway, the collection features visual and special effects by creative factory Makinarium who made replica heads of the models who carried them. #mfw pic.twitter.com/ld11OuaME3

Armani said he was “perplexed” by the cranium totes while speaking candidly on the sidelines of the unveiling of his first short film on Saturday, “I have never wanted to trick consumers, and what I show on the runway is what customers can find in stores.”

Ew, indeed. Is this the beginning of the end? Will those stories in which AIs rule the world and drive humans to extinction finally come true? Only time will tell.