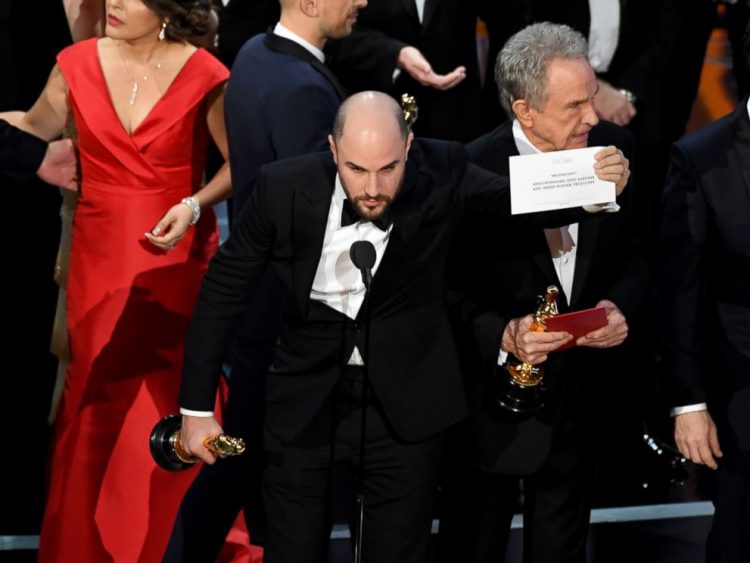 The 2017 Academy Awards was almost at its end, but that was the moment it saw the most dramatic moment in its 89-year history. Let’s just say a Steve Harvey happened all over again..

The cast and filmmakers for Damien Chazelle’s musical soon took to the stage to celebrate and offer their acceptance speeches, but it wasn’t long before the organisers and Beatty realised that they had made a mistake.

La La Land producer Jordan Horowitz was about to start his speech when all of a sudden, he held up the card to prove Moonlight was the winner, saying, “This is not a joke, Moonlight has won Best Picture.”

Here’s the moment #LaLaLand‘s cast and crew realized there was a mistake. #Oscars pic.twitter.com/XkHzXLJBsX

Clearly, it caused ruckus on stage and even on social media:

The Oscars be like… #lalaland #moonlight #oscars #academyawards #steveharvey pic.twitter.com/NbVZSP7eOZ

Shoutout to Jordan Horowitz, who had to do this. #Oscars pic.twitter.com/2AKIrMZczP

When you win the oscar right after you lost the oscar #lalaland #Moonlight #Oscars #BestPicture pic.twitter.com/MCnucgD5BD

Ryan Gosling’s face as he reacts to the mixup tough..