Beyoncé And Jay-Z’s New Intimate Tiffany & Co. Campaign Is All ‘About Love’ 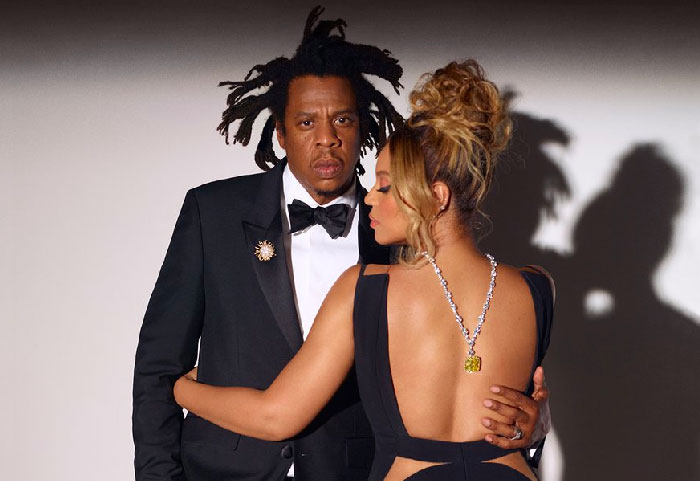 If you plan to have big names representing your campaign, you better be ready to bring out the big guns. As for Tiffany & Co. it means brining out their most valuable jewellry for the Carter’s, Beyoncé and Jay-Z.

The jewellry brand recently revealed a teaser of their new campaign, ‘About Love’ which celebrates the modern love story of the powerhouse couple that has endured many ups and downs throughout their life and career, but remained strong throughout. “Love is the diamond that the jewellery and art decorate,” says the couple.

Beyoncé looked smashing dressed in a curve-skimming black dress while Jay-Z looks absolutely dapper in an all-black tuxedo and bow tie. The highlight of the campaign, apart from it starring the Carter’s, is the iconic Tiffany Diamond, which is known to be one of the largest yellow diamonds ever discovered. The 128.54 carat diamond looks right at home adorned on Beyoncé which previously was only worn by three other people, Mary Whitehouse, Audrey Hepburn and Lady Gaga. Beyoncé wasn’t the only one who wore all the precious jewels, Jay-Z is seen donning a reconstructed pair of cuff links from the legendary A Bird on a Rock brooch by Jean Schlumberger, one of the most renowned jewelers of the 20th century who was once vice president of Tiffany & Co.

“Beyoncé and Jay-Z are the epitome of the modern love story,” Alexandre Arnault, executive vice president of product and communications, said in a release. “As a brand that has always stood for love, strength, and self-expression, we could not think of a more iconic couple that better represents Tiffany’s values. We are honored to have the Carters as a part of the Tiffany family.”

The immaculately dressed couple is seen posing in front of a rare painting by the late Jean-Michel Basquiat, Equals Pi (1982). The artwork which has always been part of a private collection will now become a permanent fixture at Tiffany & Co.’s flagship store in New York City.

It would be injustice to the fans if the world’s renowned singers star in a campaign together without having their voices part of it. Tiffany & Co. will be releasing a film on September 15 with Beyonce golden voice’s singing the new version of “Moon River”, the classic song made famous by Audrey Hepburn in the 1961 movie Breakfast at Tiffany’s, and captured on Super 8 film by Jay-Z.

This being the couple’s first ever campaign together, it has to be a memorable one with a significant cause stitched to it. As a result of the strong partnership and shared vision by both, the Carter’s and Tiffany, the brand will donate $2 million toward historically Black colleges and universities.