Kate Hudson Is Pregnant With Her 1st Baby Girl! 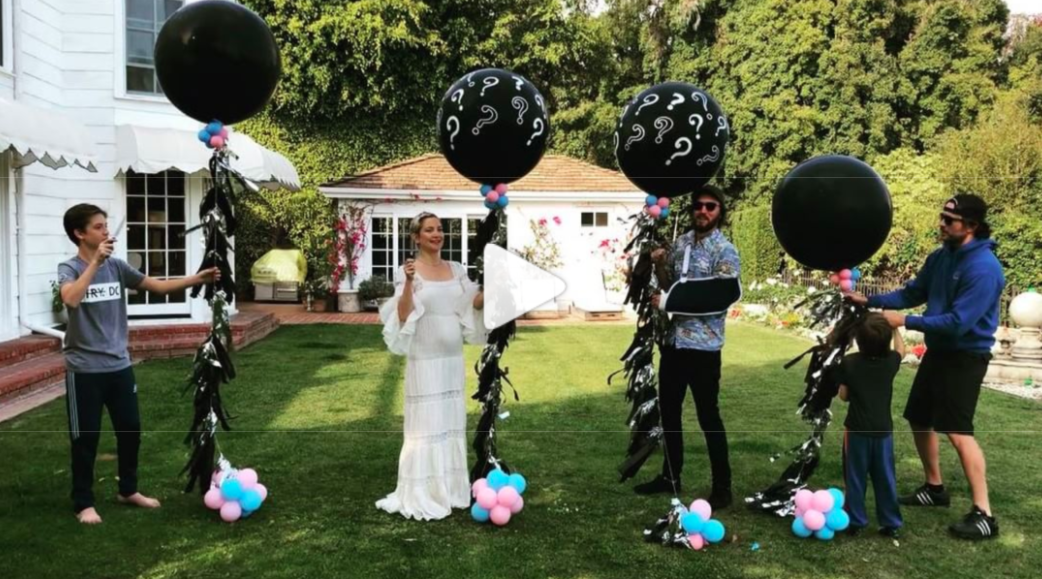 The announcement was made via a sweet video that Kate posted on Instagram, featuring the actress in a lovely white gown, along with her two sons and beau Danny, each popping the giant black balloons. Almost immediately, the whole gang jumped and cheered when pink confetti and smaller pink balloons descended, clearly indicating that the newborn will be a girl.

SURPRISE!!! 🤱 If you’ve wondered why I’ve been so absent on my social channels it’s because I have never been more sick! It was the most sick first trimester of all my children. Boomerangs have made me nauseous, Superzoom is an easy way to have my head in the toilet, food instagrams make me queezy and thinking too much about insta stories made me even more exhausted than I already had been. If you’ve seen me out and about smiling and pretending like everything is amazing…I was lying! BUT! I have broken through on the other end of that and rediscovering the joys of insta/snap. We have been trying to keep this pregnancy under the radar for as long as possible but I’m a poppin now! And it’s too darn challenging to hide, and frankly hiding is more exhausting then just coming out with it! My kids, Danny, myself and the entire family are crazy excited! A little girl on the way 💕

I can literally feel Kate’s happiness through her piercing scream of joy. In the clip, she wrote, “SURPRISE!!! If you’ve wondered why I’ve been so absent on my social channels it’s because I have never been more sick! It was the most sick first trimester of all my children.”

She continued, “Boomerangs have made me nauseous, Superzoom is an easy way to have my head in the toilet, food Instagrams make me queezy and thinking too much about Insta Stories made me even more exhausted than I already had been.”

The first time I met Danny I was 23 and enormously pregnant with Ryder. His step sisters are my best friends @sarafoster @erinfoster and so it goes we have been in the same circle for over a decade! A year ago today Danny took me on a hike and what I thought was just a hike with a family friend turned very quickly into an unexpected first date. No moves were made on this first date. In fact, it took months for him to make a first move! And as a kiss on this bridge would have been nice, the kiss a year later was so much sweeter. So on our 15th year of knowing each other we were able to open our hearts to each other to feel so much pure love and it’s been truly incredible.! ❤️Happy first date anniversary baby. #LoveThisMan 🙏 #WhatAYear

Interestingly, the pair who began dating in 2017, have actually known each other for 15 years. Kate was 23 at the time and pregnant with her first son Ryder Russell Robinson, now 14, from a previous relationship with Chris Robinson of The Black Crowes. She has another son named Bingham Hawn Bellamy, 6, with Matt Bellamy of Muse.

Well, I guess it’s safe to say Kate has a thing for rockers. The soon-to-be first time father, Danny Fujikawa is the former lead singer and guitarist for the LA-based folk rock band Chief, which he co-founded with his brother Michael. The group is now disbanded, but still remain friendly.