2017 Emmy Awards: What The Biggest Stars Wore To The Prestigious Affair 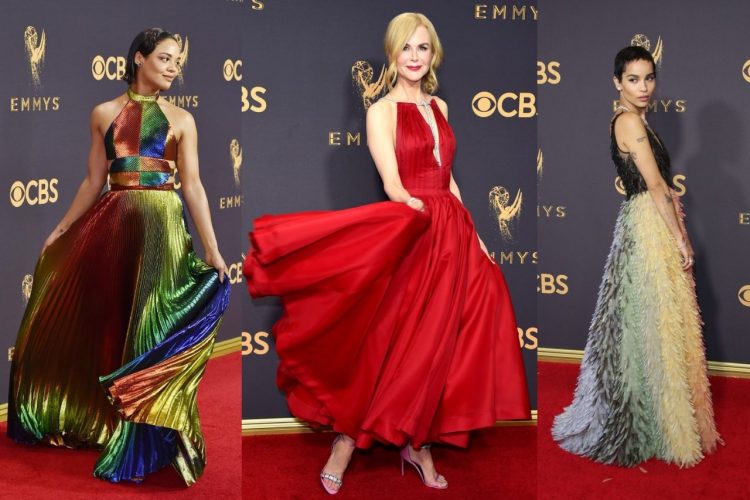 Held at the Microsoft Theatre in Downtown LA, California, the 69th Annual Primetime Emmy Awards returns to honour the crème de la crème of US television programs. The competition was steep in major categories at the Emmy’s this year — and the running for best dressed is no exception.

TV powerhouses (and their stylists) brought their A-game to the red carpet with a wide variety of styles and colours. And while some looks weren’t as killer as others, all in all, there were far more winners than losers on the Emmy’s red carpet, so consider this year’s worst-dressed list graded on a curve.

Here’s who caught our eyes while making their way into the Microsoft Theater on Sunday:

Is it just us, or does Divergent star Shailene Woodley look a lot like Jennifer Lawrence in this green velvet dress? When asked about her favourite beauty product, the actress casually replied, “Just happiness, man!”

Sofia Vergara was among the many stars who opted for a mermaid gown, wearing a Mark Zunino gown and jewelry by Lorraine Schwartz. Unfortunately, the Modern Family star looked a little too bridal in her white ruffle dress and that center-parted bangs did not help to elevate her look at all.

Picking a gown or suit for awards shows can be a stressful endeavour, but Westworld actress Tessa Thompson made it look easily trippy and fun! Her technicolour Rosie Assoulin dress brought a lightness to the carpet, and her slicked back hair and minimal jewelry balanced the look. “I feel like it’s unlike anything I’ve ever seen,” Thompson spoke of the dress, and we couldn’t agree more.

Also on our list? Zoe Kravitz. The Big Little Lies actress turned heads when she brought a taste of the rainbow to the red carpet with a feathered Dior gown from the house’s fall 2017 couture collection. Worn with a chunky necklace from Tiffany &Co., it was the perfect mix of edgy and sweet — capturing her signature boho style in a high-fashion way.

Brown has proven herself to be a fashion darling since bursting onto the scene last year with Stranger Things, and she didn’t disappoint Sunday night. Her princess-y Calvin Klein by Appointment tulle dress has just the right amount of drama, but the cropped length keeps it young and chic. Nicole Kidman also went with Calvin Klein by Appointment and she looked absolutely stunning in the red voluminous dress. The detailing on the halter neckline is a nice touch, as well as her sleek updo.

Is this pumpkin spice latte in a dress? Modern Family‘s Sarah Hyland donned a Zac Posen leaf-pattern gown with matching eye shadow and earrings — but it was a little too autumnal for our tastes.

She’s finally out! Hot momma, Jessica Biel immediately shot to the top of our “Best Dressed” list when she arrived. Her shimmering Ralph & Russo gown with an up-to-there thigh slit and sheer train was breathtaking, topping off the look with diamonds from Forevermark and paired with sparkling Stuart Weitzman shoes. If this is the year to channel layered cakes, then kudos to Mandy Moore! Sometimes you don’t need the whole rainbow. Mandy’s strapless black and white tulle Carolina Herrera gown easily screams “Honey, no”, but her whole ensemble looked slightly okay when paired with jewellery from Jennifer Meyer.

In a less competitive year, Reese’s Stella McCartney blazer dress wouldn’t be offensive enough to land her on the worst-dressed list. But compared with all the other women who looked fantastic in menswear on the carpet Sunday night, Witherspoon just looks like she forgot her pants.

79-year-old Jane Fonda donned a long, faux ponytail to the Emmys, and people are freaking out. The 79-year-old usually wears her hair short and feathered, but this year she opted for a high Ariana Grande-style ponytail and full bangs which she paired with a bubblegum pink coloured dress. We have say, we wanna look like her when we’re near 80!

Priyanka Chopra stunned everyone in a white, graceful dress — which looked like an elaborate baju kurung. It is a Balmain creation with quilted fabric, adorned with hundreds of sequins and a feathery bottom, in which the actress paired with sultry dark red eyes and berry-red lips.

Ariel Winter is giving us chills — but not in a good way. The Modern Family actress channelled old-Hollywood glam on the red carpet, and this beaded gown with high neckline by Australian designer Steven Khalil is not that. The animal print, paired with a bizarre high double-slit, does nothing for the young bombshell.