Bella Hadid, A Little Covered-Up For The Cover Of Vogue Arabia 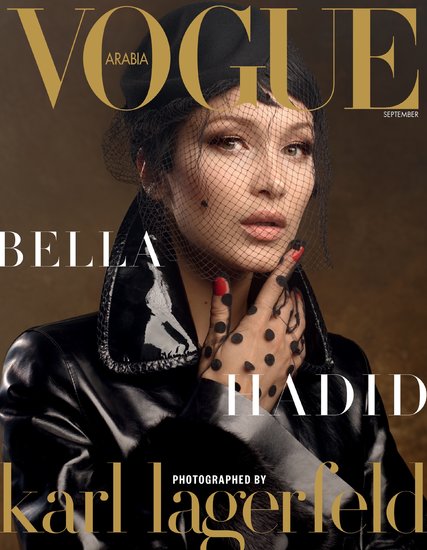 The September issue of any fashion spread is the biggest of the year — often the most profitable and influential — with a front cover designed to pack political and cultural punch. So far, this year is no exception. For one thing, the star chosen for both the Arabic- and English-language covers is Bella Hadid, 20, the Palestinian-American supermodel of the moment.

This decision comes just months after Ms. Hadid’s sister, Gigi, appeared on the cover of the magazine’s inaugural issue in a custom-made jeweled veil. That choice prompted allegations of cultural appropriation and a missed opportunity to feature a non-Western model, charges that may now resurface.

Bella Hadid was photographed by designer Karl Lagerfeld in a series of head-to-toe looks from the Italian fashion house Fendi, of which Mr. Lagerfeld is the creative director. The attire in both cover portraits is modest, but not explicitly Muslim, in keeping with the values of the majority of the magazine’s readership as well as encapsulating a major trend on the runways of the fashion capitals.

While we’ve got nothing but love for Bella — and we’re sure people in the Middle East are infatuated with her as well. However, diversity and representation are always important, and this cover seems to play more into Western ideals of beauty and culture than the region’s very own.

Vogue Arabia September Issue 💃🏻 Shot by Karl Lagerfeld Styled by the queen of all things good @amandaharlech Hair and makeup by two of the greats @peterphilipsmakeup @sammcknight1 A team I will feel forever lucky to work with, learn from and grow with. I love you! @voguearabia

What do you think — are we overreacting about this whole diversity/cultural appropriation thing, or these fashion powerhouses should really start appreciating their own regions’ beauties instead of always opting to feature Western models?